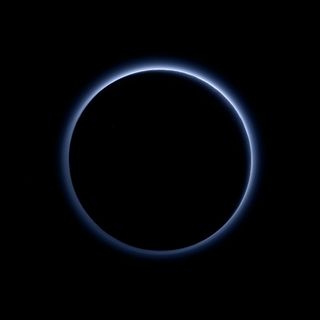 An occultation of Pluto and the sun, captured by the New Horizons spacecraft, reveals new information about the atmosphere — in this case, that Pluto has blue skies. The image was captured by the Ralph/Multispectral Visible Imaging Camera (MVIC) and released Oct. 8, 2015.
(Image: © NASA/JHUAPL/SwRI)

The airplane was already flying off the southwest coast of New Zealand when a group of astronomers in Chile phoned a group of scientists in Massachusetts, who then called the scientist aboard the aircraft, who told the navigator they had to change course.

The airplane was not a typical passenger jet or cargo aircraft but a mobile scientific observatory called SOFIA, which stands for Stratospheric Observatory for Infrared Astronomy.

On June 29, 2015, SOFIA was chasing a moving target in the sky: the shadow of the dwarf planet Pluto. For about 2 minutes, the icy world would be passing in front of a star — an event called an occultation (or, sometimes, an eclipse). Observing this event held incredible promise for Pluto scientists, but it meant getting SOFIA in exactly the right spot for them to see it. [Photos from SOFIA, NASA's Flying Telescope]

"When [an occultation] happens with Pluto, we can watch the interaction between the light from the star and Pluto's atmosphere, and learn about the atmosphere from Earth-based measurements, without having to actually go out there and see what's going on," Michael Person, a research scientist and director of the Wallace Astrophysical Observatory at MIT, told reporters at the 227th meeting of the American Astronomical Society (AAS).

Scientists have been studying Pluto occultations for several decades, Person said, but the one on June 29 had the potential to affect all subsequent studies of the dwarf planet's atmosphere from Earth. That's because two weeks after SOFIA's flight, the New Horizons probe was set to become the very first space probe to make a close encounter with Pluto. After having traveled through the solar system for 10 years, New Horizons would come within 7,800 miles (12,500 kilometers) of Pluto's surface.

If scientists on Earth could observe Pluto passing in front of a star, and compare it to what New Horizons could see from a few million miles away, they could compare the observations in order to better understand what they were seeing from Earth.

"We've been building up a catalog and a library of how the atmosphere seems to have been changing over these years," Person said. "But fundamentally, it's a remote sensing application. We didn't have any ground truth to compare it to. If we could get stellar occultation during the weeks when New Horizon was passing by Pluto, we could calibrate decades' worth of data against what New Horizons was seeing in situ and put everything on the same fundamental basis."

The potential value of checking the ground-based data against the New Horizons data made it "very important" that scientists be in the right place to observe this occultation, Person said. But like most things, that's easier said than done.

The alignment of Pluto or another planetary body with a background star depends on the position of the observer. That's why solar eclipses (when the sun is blotted out by the moon) are not visible from every location on Earth. If, during the June 29 occultation, the shadow of Pluto didn't happen to fall on a telescope, the scientists wouldn't have been able to gather any data. If the shadow fell on a spot in the middle of the Pacific Ocean, there would be no telescopes to see it. And even if the shadow did pass over a telescope, it might have been a very small telescope, or one that wasn't the best for observing this type of thing. That was just one problem.

"If it's cloudy when you're trying to observe it during the 120 seconds the shadow is whizzing by, you don't see anything," Person said. "In my observing career looking at these occultation events, [I've had] several times when clouds rolled in within 3 minutes of the event happening."

SOFIA eliminates most of those problems. Capable of cruising at 45,000 feet (13,700 km), the observatory gets above the clouds, and can easily fly over just about any location on Earth, including the open ocean. Scientists can load up all kinds of observing equipment so that they travel with the best instruments for the type of observations they'd like to do.

Plus, SOFIA gets above most of Earth's atmosphere, avoiding a problem that often occurs during many types of astronomical observations: Viewing the cosmos through Earth's atmosphere can be kind of like trying to see through a pair of eyeglasses with the wrong prescription. In some ways, it's literally like looking through a windshield that's obscured by raindrops, because water in the atmosphere scatters light.

To get in the right position for the June 29 occultation, Person and his team chartered a path over the southwest coast of New Zealand.

"Just as we were starting out, heading toward where we expected the shadow would be … our ground teams were observing Pluto from the ground in Chile, sending that Chilean data … up to our teams at Lowell [Observatory in Arizona] and MIT to do the astrometry, and then called me via satellite phone on SOFIA, where we had a quick discussion with the navigators and moved the plane off the original flight plan and on to a new one, so we could intercept the shadow in real time," Person said.

The new flight path put SOFIA within "a few kilometers" of the center of the shadow, and achieved what Person and the other scientists hoped it would: By comparing their observations with what New Horizons saw, they were able to confirm the detection of haze in Pluto's atmosphere, and could even study the size of the particles in the haze.

The value of the dual observation will carry on for years, Person said. Although New Horizons will never fly by Pluto again, scientists can observe occultations year after year, and keep an eye on Pluto's changing atmosphere. And now, they know how their observations from Earth (or in a plane 45,000 feet above the surface) compare with what's actually happening on Pluto.

"SOFIA is an ideal platform for this kind of stellar occultation event," Person said.