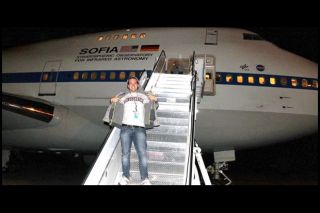 For the first time ever, astronomers have used instruments onboard the world's largest airborne observatory to examine a massive planet beyond Earth's solar system.

Studies of exoplanets normally have been confined to either outer space or the ground. But these new observations, taken aboard the Stratospheric Observatory for Infrared Astronomy (SOFIA), show the potential for these studies to take place on high-speed flights through Earth's atmosphere.

Although the new observations represent a proof-of-concept run, they revealed that the airplane-based observatory can study exoplanets while combining the advantages of a space-based telescope and the easy access of ground-based instruments. [A Photo Tour of NASA's SOFIA Flying Observatory]

"Exoplanets are rare events that are sometimes hard to observe from a fixed ground-based telescope," Daniel Angerhausen, a postdoctoral fellow at NASA's Goddard Space Flight Center in Greenbelt, Maryland, told Space.com by email. He presented the results of the first exoplanet observation using SOFIA during the Emerging Researchers in Exoplanet Science Symposium, held at Pennsylvania State University in May.

"With SOFIA, at least theoretically, we can fly to the perfect geographic place to observe these events," he said.

A joint project between NASA and the German Aerospace Center, SOFIA is a Boeing 747SP aircraft modified to include a door in the tail that allows a 2.5-meter (8.2 feet) telescope to study the sky. The aircraft's first flight test occurred at the end of 2009, and the first images were returned in the spring of 2010.

With both an infrared telescope and an optical telescope, SOFIA can study the birth and death of stars, the formation of new planetary systems, the characteristics of objects in the solar system, and black holes at the center of distant galaxies. Unlike ground-based telescopes, it can fly high above the clouds, allowing it to study light cluttered or blocked by the planet's atmosphere.

In October 2013, Angerhausen took SOFIA's telescope on a first-ever flight to study an exoplanet, an object the instrument was not designed to observe.

"Once upon a time, nobody expected SOFIA to do this," Dana Backman, director of SOFIA's outreach programs, said in an email to Space.com. "The observatory and instrument designs were not optimized for exoplanet studies."

During the flight, the telescope studied HD 189733b, a hot, Jupiter-size planet orbiting its star once every 2.2 days. To study the planet, SOFIA measured the dip in light known as a transit that occurs as the planet crosses in front of the star from Earth's perspective.

"HD 189733b is one of the brightest and best-studied transiting exoplanets, and a prototype for the so-called 'hot Jupiter' class of exoplanets," Angerhausen said. "For the first-ever observation with SOFIA, we chose that target as a great benchmark to test SOFIA in this field."

Although the primary goal was to verify how well SOFIA could measure an exoplanet, the study also managed to confirm a previous measure made with the Hubble Space Telescope that shows the scattering of light, possibly caused by haze, in the upper atmosphere of the exoplanet.

"SOFIA can now, or with some tweaking, play in the exoplanet big leagues," Backman said.

The results were published online in July in the Journal of Astronomical Telescopes, Instruments, and Systems.

"A space telescope that comes home every morning"

Although SOFIA wasn't designed to study exoplanets, Angerhausen maintains that it is an excellent resource. As an airplane, SOFIA can ascend above the atmosphere that absorbs signals of molecules from exoplanets that are interesting to scientists on Earth, normally preventing the study of these moleculesfrom the ground.

And also unlike ground-based observatories, SOFIA has the potential to fly to the optimal location to study an exoplanet as it crosses in front of its star.

Like all instruments, SOFIA has some limitations. First, for most flights, SOFIA must start and land from its home base in Palmdale, California, making flight legs longer than 4 hours impossible. And because the telescope can observe out of only one side of the plane, only half the trip can be used to study a single object before the plane has to turn around and head back, pointing the telescope away from the target, Angerhausen said.

Another challenge for exoplanet studies is that SOFIA's current suite of instruments is not ideal for probing faraway solar systems, because they were designed to study faint objects in relatively short periods rather than long ones, Angerhausen said. However, the instruments onboard today can be changed out in the future for ones more in line with studying distant worlds.

Angerhausen sees SOFIA as an excellent tool in the developing study of exoplanets. "Since it's a space telescope that comes home every morning, it can be updated with the newest instrumentation without dangerous and expensive astronaut missions," Angerhausen said.

More recently, he used SOFIA to study GJ 1214b, a giant alien planet in the realm of a supersize Earth or a small Neptune, and hopes to continue to utilize it for exoplanet research.

"In a perfect world for me, I would be able to take SOFIA on any flight plan I want and put the first dedicated instrument for exoplanet science on board," Angerhausen said.

Watch the video of SOFIA's exoplanet observation on YouTube.