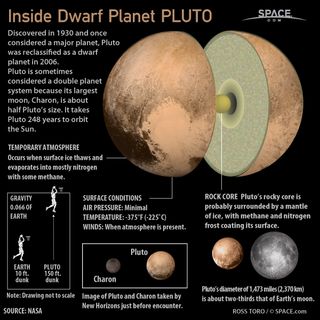 Discovered in 1930 and once considered a major planet, Pluto was reclassified as a dwarf planet in 2006.  Pluto is sometimes

considered a double planet system because its largest  moon, Charon, is about half Pluto’s size. It takes Pluto 248 years to orbit the Sun.

A temporary nitrogen-methane atmosphere forms when Pluto's surface ice thaws, when Pluto is closest to the sun.

Pluto’s rocky core is probably surrounded by a mantle of ice, with methane and nitrogen frost coating its surface.