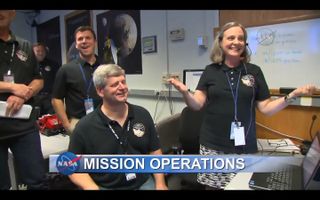 The first-ever flyby of Pluto was a big success.

NASA's New Horizons spacecraft has sent a status update home to its handlers here on Earth, indicating that the probe survived its historic encounter with Pluto this morning (July 14) — and that reams of amazing data should be on the way soon. The message came in to mission control at the Johns Hopkins University Applied Physics Laboratory (APL) in Laurel, Maryland, at 8:52 p.m. EDT today (0052 GMT Wednesday), 4.5 hours after New Horizons sent it.

The good news reverberated around the world, making a mark in the corridors of power.

"Pluto just had its first visitor! Thanks ‪@NASA — it's a great day for discovery and American leadership," President Barack Obama (@POTUS) tweeted tonight.

New Horizons is about 3 billion miles (4.8 billion kilometers) from Earth, so communication is not exactly instantaneous. And the spacecraft cannot simultaneously send messages and gather data, which explains why the update didn't come in sooner: The team prioritized making observations at and around the time of closest Pluto approach, which occurred at 7:49 a.m. EDT (1149 GMT).

Mission team members said they had expected New Horizons to make it through the flyby OK, but they couldn't be sure until hearing from the probe. New Horizons streaked through the Pluto system at about 31,000 mph (50,000 km/h) — so fast that a collision with a piece of debris the size of a grain of rice could have knocked the spacecraft out.

So the check-in was met with boisterous cheers — and certainly more than a few sighs of relief — by the team at APL, and by NASA officials as well.

"You have inspired the next generation unbelievably," NASA Administrator Charles Bolden told the New Horizons team during a news conference tonight, after the check-in success was announced.

"You have made Pluto almost human," Bolden added, his voice thick with emotion. "Congratulations to everyone. It's a historic win for science and for exploration. Today, we've truly once again raised the bar of human potential. Let the journey of discovery continue."

It was the second celebration of the day at mission heaquarters. Team members also erupted this morning when New Horizons reached closest approach, coming within just 7,800 miles (12,500 km) of Pluto's surface to scrutinize the dwarf planet, its big moon, Charon, and the system's four tiny satellites with seven different science instruments.

That detailed investigation is ongoing. New Horizons will remain in its current nine-day-long "encounter mode" of operations through Thursday (July 16), mission team members have said.

The spacecraft has already beamed home stunning images of Pluto and Charon over the past few weeks, but the photos from closest approach — which should start reaching mission control tomorrow morning — will be on another level altogether.

"Our data tomorrow will have 10 times the resolution of what we see today, and it will knock your socks off," New Horizons principal investigator Alan Stern, of the Southwest Research Institute in Boulder, Colorado, said in a statement today.

Stern and others have said that New Horizons' best images should show features on Pluto's surface as small as the ponds in New York City's Central Park.

But don't expect to see everything by the end of the week; it will take up to 16 months for New Horizons to beam everything back to Earth, mission team members have said.

The $723 million New Horizons mission launched in January 2006. But Stern and others began developing the concept way back in 1989, the same year that NASA's Voyager 2 probe zoomed past Neptune.

That Neptune flyby marked the last time one of the solar system's historically recognized nine planets received its first close-up. (Pluto was still regarded as a "true" planet when New Horizons launched; the International Astronomical Union reclassified the faraway world as a dwarf planet later in 2006.)