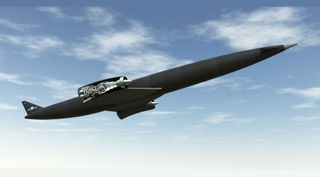 PARIS — Defense technology giant BAE Systems plc on Nov. 2 said it had agreed to purchase a 20 percent equity stake in single-stage-to-orbit engine designer Reaction Engines Limited (REL) and would provide the company with "industrial, technical and capital resources" for ground-based testing of a prototype.

The investment is a fresh gust of confidence in REL following the British government's decision in 2013 to invest 60 million British pounds ($92.5 million) in REL's SABRE, or Synergetic Air-Breathing Rocket Engine, and will help accelerate REL's progress on the test article.

SABRE, in development for more than two decades – including many years where funding was scarce – is part of REL's proposed Skylon rocket, which would take off horizontally from an airport runway, reach Mach 5 speeds in the atmosphere and then move to low Earth orbit to deliver payloads.

Its key technological aim is to prove the operational feasibility of a lightweight heat exchanger that ingests incoming air in the atmosphere at a temperature of 1,000 degrees Celsius and cools it to minus 150 degrees Celsius in one-hundredth of a second without generating ice buildup.

REL has secured the tentative endorsement of the European Space Agency, which dispatched a team to REL to see whether the project showed promise. The ESA evaluation ended with a positive assessment of the work.

The U.S. Air Force Research Laboratory subsequently looked at REL and SABRE and said the technology shows promise, with the caveat that it might be better suited to an less-challenging architecture employing two stages to reach orbit.

In mid-2013 the British government announced its two-tranche, 60 million-pound grant. In August of this year, the executive commission of the 28-nation European Union said the grant does not violate EU rules on state aid to individual companies.

The EU approval means the British government grant should start flowing to REL before the end of the year via the U.K. Space Agency.

A separate budget of 10 million pounds from the British government is to be managed by ESA, through ESA's technology support program. Britain is expected to be the source of most, but not all, of that funding.

REL has estimated that development of the ground prototype would cost upwards of 240 million pounds. The involvement of BAE gives the company access to both the capital and industrial technology assets to speed the work.

Nigel Whitehead, managing director for programs of BAE Systems, said in a Nov. 2 statement that the REL investment "gives BAE Systems a strategic interest in a breakthrough air and space technology with significant future potential. Our partnership with Reaction Engines is part of our sustained commitment to investing in and developing prospective emerging technologies. BAE Systems' considerable engineering and development expertise will help support the delivery of the first demonstrator for the SABRE engine."

Britain has been a minor player in ESA's Ariane and Vega rocket-development programs, including the Ariane 6 and Vega-C rockets, in which ESA governments led by France, Germany and Italy, have agreed to invest some $4.5 billion between 2015 and 2020.

Ariane 6 and Vega-C are both conventional expendable rockets. ESA also has established a small future-launch-technology funding line for promising but unproven technologies related to reusable rockets, including SABRE and Skylon.