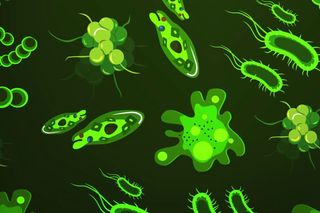 From the earliest of times, philosophers and scientists have tried to understand the relationship between animate and inanimate matter. But the origin of life remains one of the major scientific riddles to be solved.

The building blocks of life as we know it essentially consist of four groups of chemicals: proteins, nucleic acids, lipids (fats) and carbohydrates. There was much excitement about the possibility of finding amino acids (the ingredients for proteins) on comets or distant planets because some scientists believe that life on Earth, or at least its building blocks, may have originally come from outer space and been deposited by meteorites.

But there are now extensive examples of how natural processes on Earth can convert simple molecules into these building blocks. Scientists have demonstrated in the lab how to make amino acids, simple sugars, lipids and even nucleotides – the basic units of DNA – from very simple chemicals, under conditions that could have existed on early earth. What still eludes them is the point in the process when a chemical stew becomes an organism. How did the first lifeforms become alive?

Although there is some debate about the definition of life, it is generally recognised that all life requires the formation of a sustainable cell, and cells must be capable of reproduction. In human cells, this is done using strands of the chemical DNA. When cells divide, they use the DNA as a blueprint for how to make the new cells.

But cell division doesn’t always produce an exact copy of the DNA. Usually this copying mistake, or mutation, is a disadvantage and the cell can be discarded. But sometimes the mutation confers a benefit or advantage to the cell (or organism) in its present environment. In this case we say it is “selected”, meaning that it thrives and multiplies to the detriment of other cells.

It’s all in the chemistry

But how did the very first cells emerge? Living systems are chemically based and therefore must obey the laws of science. Life appears to be just a series of chemical reactions – and we now understand how these reactions work at the molecular level. So surely this should tell us how life came about?

The conversion of these simple biomolecules into more complex ones has been observed under a variety of elementary conditions. For example, fatty acids – a type of lipid building-block molecule – naturally clump together into membrane-like structures, called vesicles, and even undergo chemical processes that resemble cell division and replication. Making simple replicating systems under self-sustaining conditions has also been shown to occur for both simple nucleotides (fragments of DNA) and peptides (fragments of proteins).

The real problem is in understanding how this “machinery” of chemicals came together to generate life. The watershed where lifeless chemical activity is transformed into organised biological metabolism is extremely difficult to identify and the trigger for this is a key ingredient missing from the “primordial soup”.

The assumption that early life forms must have been similar to what we see today may be preventing us from answering this question. It’s possible that there were many unsuccessful precursors that bore little resemblance to present-day life. There has been speculation that primitive starting points could even have been based around an element other than carbon (the substance at the heart of all life today). Some researchers suggest that life may have originally evolved in liquids other than water. These alternatives are fascinating, but it’s difficult to find a starting point for researching them because they are so unfamiliar.

A key trait that sets life apart from inanimate matter is its reliance on organisation. Molecules must be arranged in a specific way and replicate according to a detailed pattern. But the natural tendency of the whole universe is towards a state of equilibrium, or balance – where everything is spread out and nothing is ordered. Maintaining an ordered structure means life is constantly off-balance and this requires energy, which organisms must extract from their surroundings.

One way that organisms do this is to cause movement of molecules or even sub-atomic particles that can then generate energy for a cell. For example, organisms living in hydrothermal vents on the sea floor get their energy from the transfer of protons through the cell membrane.

Living systems maintain their “off-balance” state by combining the ability to self-replicate with the ability to extract energy from their surroundings. To discover the origin of life, we need to understand how these properties combined to form a sustainable unit.

Some scientists are adopting a top-down approach, attempting to answer this question by removing bits of a living cell to determine the minimum structure required to sustain life. Others are approaching it from the bottom-up by combining the building blocks in a primitive container to mimic a simple cell.

While both approaches may be enlightening, the precise moment of transition from chemical to life (and vice versa) still evades us. But the lack of discovery is fascinating in itself – it confirms that creating life is difficult and requires conditions that are no longer naturally present on the Earth. A breakthrough in this area would not only tell us the requirements for life, but also the circumstances of its emergence.