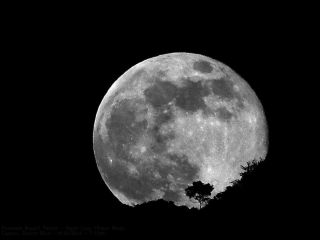 Editor's note: To find out more about the rare supermoon lunar eclipse of Sept. 27-28 and how to see it, visit: Supermoon Lunar Eclipse 2015: Full 'Blood Moon' Coverage

A full moon will grace the sky tonight (Aug. 29), but it is only a dress rehearsal for next month, when the full moon will undergo a total lunar eclipse.

Some Native American fishing tribes referred to the full moon of August as the "Sturgeon Moon," since sturgeon, a large fish of the Great Lakes and other major bodies of water, were most readily caught during this month. A few tribes knew it as the "Full Red Moon" because, as the moon rises, it appears reddish through any sultry haze. It was also called the Green Corn Moon or Grain Moon.

Along the West Coast the eclipse gets underway at dusk, only minutes after the sun has set and as the moon is rising. The eclipse will also be visible from Europe, but from there it will occur in the hours before dawn breaks tonight (Sept. 28).

It is not too early to begin making preparations for viewing next month's total lunar eclipse. One of things to consider is the moon's location in the sky during the eclipse. For those who live along the West Coast of the U.S. and Canada, this will be an important factor, since initially the eclipse will be rather low in the eastern sky. Find out if tall trees or nearby buildings will block your initial view of the moon.

You can get a very good idea about where the moon will be in the sky during the eclipse by looking for it on Sunday night (Aug. 30).

On that Sunday night and into early Monday morning, the moon — nearly 1.5 days past full— will be  a couple of degrees away from the region of the sky where it will also be during the eclipse. In preparation, observers may want to look for where the moon is located on Aug. 30, in case it is blocked by tall trees or other obstructions.

This method will be especially helpful for those near and along the West Coast who might want to determine where the moon will be relative to their local horizon (and local landmarks) as it rises on eclipse night. You can also watch a webcast about tonight's full moon from the Slooh Community Observatory. Information about the webcast, which is for members of the skywatching website, can be found http://main.slooh.com/event/supermoon-rising/, and begins at 9:30 p.m. ET (0130 GMT).

Editor's note: If you capture an amazing view of the August full moon, or any other night sky view, and want to share it with Space.com for a story or gallery, send images and comments in to manaing editor Tariq Malik at: spacephotos@space.com.