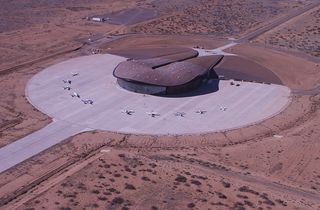 A lawmaker in the Land of Enchantment is disenchanted with the state's Spaceport America.

For one, the complex would be home for the commercial operations of Virgin Galactic's suborbital space tourism business. A Senate bill to sell New Mexico's Spaceport America  facility moved on to the Senate Finance (SFC) with a bipartisan no-recommendation last month.

A hearing date in the SFC has not yet been scheduled. The Senate bill can be found here at:
http://www.nmlegis.gov/lcs/legislation.aspx?Chamber=S&LegType=B&LegNo=267&year=15

According to Senator Muñoz, among a number of complaints: "There was a lot of hoopla before that if 'we build it … they will come,' but it has been several years now and nobody's shown up yet. New Mexican taxpayers are continuing to foot the bill for a $250 million empty facility that is providing the Legislature shaky operational information at best."

In response, Christine Anderson, New Mexico Spaceport Authority's Executive Director, said: "I think some legislators are impatient to have the commercial space industry literally take off! As others have said, space is hard and taking commercial passengers to space requires a great deal of due diligence."

Anderson is responsible for the development and operation of the world's first purpose-built, commercial spaceport, Spaceport America.

"In the end, the spaceport is doing fine," Anderson said, as "it generated just over $1.6 million in income last year, and everyone needs to not lose sight of the end game," she said.

"The sentiment to 'sell the spaceport' is not widely embraced," Anderson said. There were many who spoke against the bill, she said.

BTW: Check out my good friend, Bob Martin's TV report – a reporter for KRQE News 13 in Albuquerque – regarding the recent "fly-in" at Spaceport America:

Also, check out the Albuquerque Journal Editorial Board's view of the topic: http://www.abqjournal.com/544492/opinion/hold-the-countdown-on-sale-of-spaceport.html