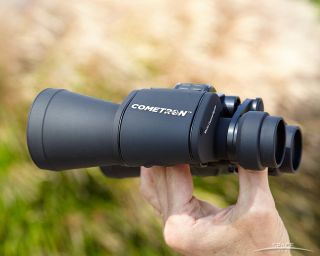 Frankly, I expected to laugh at these binoculars. Instead, I ended up loving them for what they are. If you are looking for a very inexpensive entry to the joy of binocular skywatching, you can't do better than Celestron's Cometron 7x50.

As a first binocular for young astronomers, they excel. As a grab 'n' go, "don't really care if they get trashed,"  second set of binoculars for adults, the Cometrons are without equal.

Below: See our Hands On Video Tour of Celestron's Cometron 7x50 Binocular:

The 7x50 and its big sister, 12x70, appeared in July 2013, 10 months after the discovery of Comet ISON, which was predicted to graze the sun on Nov. 28, 2013. Had ISON survived its close-up with our star, it might have made for spectacular viewing during the holiday season. The Cometron name, a solid marketing idea, would have been fortuitous. But, alas, Comet ISON never became large enough to see very well through Cometrons. It was ripped apart by titanic gravitational forces a few hours before it even reached its closest encounter with the sun ("perihelion").

Celestron claims only that the Cometrons are "water-resistant," not waterproof. The body components are (minimally) rubberized. But that skin ends well before visible joints between body parts, suspect points for liquid entry. This is one of many trade-offs allowing Celestron to bring you (or your favorite youngster) good optics at a great price.

The prisms are of the Porro design preferred for astronomy. But they are cast of the slightly cheaper BK7 glass. All other binoculars we reviewed are BAK4. I saw the difference easily when comparing the "exit pupil" of the high-quality Oberwerk 8x40 (BAK4) to that produced by this Celestron 7x50. Instead of the sharply defined disc of light projected by the Oberwerks, the Cometrons yielded a fuzzy pseudo-circle, which hardened inward to a diamond-shaped (slightly stretched, rotated square) point on top.  ("Exit pupil" is the disc of virtual image at the binoculars' "focus point." It’s the circle that you actually look into.)

In practical use, this means you must orient your eyes to look "further in" to the image circlets on the Cometrons than you would on comparable binoculars made with the higher quality BAK4 glass. But, perhaps to compensate, Celestron's designers have chosen an optical geometry that makes a larger diameter exit pupil. It's more than 7mm across; unusually large. So the practical working area of the exit pupil works out to be about the same. This offers a clear example of how optical designers can play with variables of material, processing and design to optimize their result at a desired price point.

The large exit pupil also serves (what we're assuming is) the intended kid market. Young folks' eyes are more elastic; their pupils can dilate wider than the pupils of us old fossils. This lets kids see better in the dark and grow dark-adapted faster (offsetting shorter attention spans!). The Cometrons' wider exit pupil is a better fit for young eyes.

These Cometrons also fit a wide range of faces; young astronomers – and older ones too – can easily adjust the spread of the oculars. The center focus knob is easy to turn, yet will keep sharp views even when warm weather makes the lubricant flow.

A wide dome of starscape awaits you in the virtual image of that exit pupil, letting you or your child get that "suspended in the sky" feeling.

If you or your young user wears glasses (especially for nearsightedness), the relatively short 13mm eye relief may clamp your ability to see the full visual field. [Eye relief is the distance from the eyepiece lens' surface to the last spot a full width image can be seen.] Roll down the rubber eyecups and you can get closer, but you'll get more stray light across your glasses and eyes. And your eyeglass lenses my kiss your binoculars' lenses; no harm as long as they don't crash.

Of course, your family can use these binoculars in the daytime for sports and nature watching. Just don't get too close to your target. Cometrons are, after all, optimized to watch objects at the distance of comets. They won't focus on, say, a bird nesting closer to you than about 30 feet.

As with most inexpensive binos, the dust caps have no fixtures for retainer cords. If your kids are anything like mine, these caps will stray far from their lenses by the end of the first night of use without diligent parental accessory-wrangling.

To investigate other binoculars, or see how to evaluate and compare binoculars for yourself, please choose from these links: