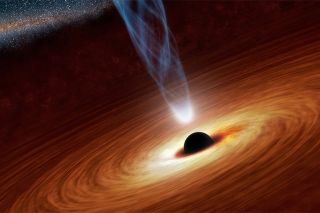 Astrophysicists have analyzed two decades-worth of X-ray data and discovered three events inside galactic cores that can be interpreted in only one way: stellar destruction.

For any given galaxy, it is estimated that a star will be destroyed by the central supermassive black hole approximately once every 10,000 years. The vast majority of known galaxies are thought to contain at least one supermassive black hole in their cores, having a dramatic effect on galactic and stellar evolution. [Images: Black Holes of the Universe]

Should there be a rapid injection of material — i.e. a star becoming blended and ingested into the accretion disk — powerful X-rays of a specific signature will be generated.

In a new study by the Moscow Institute of Physics and Technology and Space Research Institute of the Russian Academy of Sciences, astrophysicists trawled through observations from two space observatories to discover three likely occasions where stars have been eaten by supermassive black holes. Their work has been accepted for publication in the journal Monthly Notices of the Royal Astronomical Society.

Using data from the German ROSAT and European XMM-Newton space observatories, X-ray data from 1990 (to today) could be accessed and three events in different galaxies were positively identified — designated 1RXS J114727.1 + 494302, 1RXS J130547.2 + 641252 and 1RXS J235424.5-102053. Invaluable to this study was the long-duration observations by ROSAT (which operated from 1990 to 1999) and XMM-Newton (launched in 1999) that could detect the moment of stellar death, keeping track of the X-ray emissions over the years as the star’s material was gradually ingested.

No more than two dozen other stellar death event candidates were seen in the observations, but positive identifications probably won’t be available until the launch of the multi-instrument Spectrum-X-Gamma space observatory in 2016.

This work has added some much needed detail to these rare events, indicating that (on average) one star every 30,000 years in any given galaxy will be destroyed by the central supermassive black hole, though the researchers caution that more observations of stars being eaten by supermassive black holes are needed.

Source: Moscow Institute of Physics and Technology via Space Fellowship