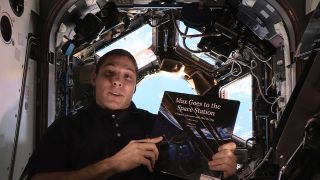 It's not every day that a dog helps save astronauts in space, but that's exactly what happens in author Jeffrey Bennett's latest tale of a pooch named Max and his trip to the International Space Station. And there's a twist: The science-themed children's book is actually in space today in the cosmic library aboard the real-life space station.

Bennett's "Max Goes to the Space Station" (Big Kids Science, 2013) launched into space earlier this year on a commercial cargo ship alongside other vital supplies for astronauts on the space station. That set the stage for "Story Time From Space," an educational outreach project in which astronauts will read "Max Goes to the Space Station" and Bennett's other works in space to encourage children on Earth to learn about space and science. One of the books, "Max Goes to the Moon," has flown in space before and was read in orbit by NASA astronaut Alvin Drew, one of the creators of Story Time From Space.

Space.com recently caught up with Bennett — who received the 2013 American Institute of Physics Science Communications Award in January for "Max Goes to the Moon" — to discuss the launch of "Max Goes to the Space Station" and his other books (which sent Max to the moon, Mars and Jupiter). Another of Bennett's books, "The Wizard Who Saved the World," also hitched a ride to the station with the launch. Here's what Bennett revealed on the origin of Max the Dog, the pooch's trips into space and what it means for kids:

Space.com: "Max Goes to the Space Station" is the latest in a series of books that send Max on a space adventure. What led you to use a dog to share space exploration with kids?

Jeffrey Bennett: I wanted to write science books that would appeal not only to kids who were already into science, but also to kids who might not otherwise pick up a science book. Since kids love dogs, sending a dog on the adventures seemed like a natural way to create stories that would hold kids' attention so that I could teach them some science at the same time. [Animals in Space: 10 Cosmic Tales]

Space.com: Did you ever think the books would eventually be launched into space? Or be read from space?

Bennett: When I first starting writing, I had all sorts of delusions of grandeur about how much my books would sell and so on, but never in my wildest dreams did I imagine that they'd really go into space. Indeed, when Patricia Tribe (an educator who came up with the Story Time From Space idea along with astronaut Alvin Drew) first called me and told me they'd selected my books, I thought it had to be a prank phone call.

Space.com: Is Max based on a real dog? Are you a dog owner now? Any other pets?

Bennett: Yes, Max is real. My wife and I got the original Max as a puppy, and it was completely her doing; at the time, I had no interest in having a dog. But Max won me over quickly, and the inspiration for "Max Goes to the Moon" actually came to me one day while I was out walking with Max and my infant son and looked up at the moon in the morning sky. Max lived to be 9 1/2 (there's a page honoring him at the end of "Max Goes to Mars"), and he served as the model for Alan Okamoto’s artwork in "Max Goes to the Moon" and "Max Goes to Mars."

We then got another Rottweiler, Cosmo, who was painted as Max in "Max Goes to Jupiter" by artist Michael Carroll; readers will notice that he is introduced in the story as the grandson of the original Max. Because "Max Goes to the Space Station" is a prequel to "Max Goes to the Moon," Carroll worked mainly from photos of the original Max, but also paid some attention to Cosmo, since the two dogs look very similar. [Pioneering Animals in Space: A Photo Gallery]

Note also that all the antics of Max in the story are based on things our dogs have really done. For now, Cosmo is our only pet, but we're looking to adopt another Rottweiler (so if anyone knows a friendly and relatively young one looking for a home, let me know!).

Why do you think it's important to try and spark interest in space exploration and science in children?

Space.com: Bennett: At the risk of sounding overly philosophical, I think the human race is at a real turning point in history. We have a great many problems, and I believe the only way we will solve them is if children everywhere grow up inspired to believe that each and every one of them has a role in building a better future.

From my viewpoint, there's no better way to provide this inspiration than space exploration, especially because its international character provides tangible evidence of the great things that we can achieve when we work hard and work together. That's why I think it is critical to engage kids in science and exploration, so that even if they don’t become scientists themselves, they'll still feel like they have a role to play in setting our species on a course that will ultimately take us to the stars. (FYI, you'll note that finding this role is the major theme of "The Wizard Who Saved the World.")

Space.com: How do you think Story Time from Space – which actually makes an appearance in the latest book – can help that goal?

Bennett: In all my writing, whether for kids, for grownups, or for my college textbooks, I always seek to find a way to combine "education, perspective, and inspiration": The education piece is the science (and literacy) content, the perspective piece involves seeing ourselves and our planet in a new light, and the inspiration piece comes in trying to get kids to dream of how much better the world could be if we all work together.

Story Time From Space makes all three themes clearer, because you really can't miss any of them when you see astronauts reading from the International Space Station. After all, it's science that made the station possible, our perspective changes whenever we look at Earth from orbit, and you can’t help but be inspired by the international character not only of the astronauts aboard the station, but of the thousands of people from every nation and culture who have contributed to building and operating it.

Also, of course, because the videos from Story Time From Space (both of the readings and of science demos that the astronauts will conduct) will be posted freely on the web, I hope that the program will contribute to these goals for far more people than could ever be reached by books alone.

Space.com: Have you always been a fan of space exploration, or did something else spur your interest in subject?

Bennett: I was always a fan, but that’s probably a result of being in elementary school during the Apollo era. Indeed, if you ask most any scientist or engineer of my generation, you’ll likely find them tracing much of their inspiration to Apollo. To me, that is proof that inspiration provides huge payoffs in economic terms, and explains why I think it is critical that we embark on new and greater adventures in space exploration.

Bennett: My hope is that the Big Kid Boxes allow the books to reach a broader range of children. Younger kids might simply enjoy the artwork and the story, while older kids can learn sophisticated science by reading the boxes. Of course, they also secretly serve as "parent boxes": If your child asks you a question as you read the book, you'll probably be able to answer it by reading the Big Kid Boxes for yourself.

Space.com: Finally, we have to ask: What’s the next mission for Max in space?

Bennett: I'm still not sure if I'll do another book in the series, but Saturn is the obvious choice if I do, because there is so much great science from the Cassini mission that I’d like to share with kids. Pluto might also provide a great opportunity after we get the data back from the New Horizons flyby next year.