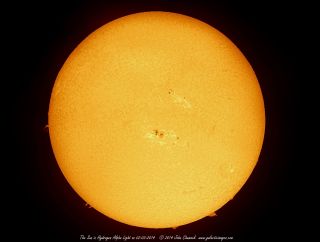 "The massive sunspot AR 1967 is now wider than the planet Jupiter and is very active," Chumack told Space.com in an email on Feb. 4. "Yesterday no less than seven M-class solar flares have erupted from this region."

The sunspot group AR 1967 has continued to unleash several solar flares as it makes its two-week trek across the face of the sun, as seen from Earth. During its last rotation in January, the sunspot group was known as AR 1944 and fired off the first major sun storm of 2014 - an X-class solar flare - in January. X-class flares are the strongest solar storms the sun experiences, with M-class events registering as medium-strength solar events.

Residing at the heart of the solar system, the sun is among more than 100 billion stars in our host galaxy, the Milky Way. Approximately one million Earths could fit inside the sun, as it holds 99.8 percent of our solar system’s mass. Nuclear reactions bring core sun temperatures to more than 27 million degrees Fahrenheit (15 million degrees Celsius). The visible part of the sun is about 10,000 degrees F (5,500 degrees C).

Sunspots are typically cooler regions that reach about 3,800 degrees Kelvin (6,400 degrees Fahrenheit, or 3,500 degrees Celsius). While this is much cooler than the rest if the sun, a single sunspot is still 10 times brighter than the full moon. By keeping track of sunspots, scientists can measure the solar activity and space weather. These dark, active areas on the surface of the sun are the result of an interaction of plasma with the sun's magnetic field—mostly occurring in two mid-latitude bands on either side of the sun's equator.

The sun is currently in an active phase of its 11-year solar weather cyle. The current cycle, known as Solar Cycle 24, was expected to peak in late 2013.