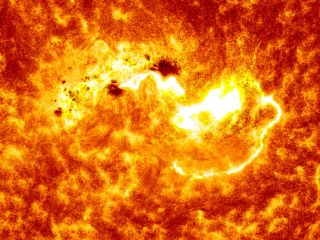 This NASA view combines two images from NASA's Solar Dynamics Observatory captured on Jan. 7, 2014. Together, the images show the location of a giant sunspot group on the sun, and the position of an X-class flare that erupted at 1:32 p.m. EST.
(Image: © NASA/SDO)

A massive solar flare erupted from the sun on Tuesday (Jan. 7), rising up from what appears to be one of the largest sunspot groups seen on the star's surface in a decade, NASA officials say.

NASA's Solar Dynamics Observatory captured a video of the huge solar flare as it developed, showing it as an intense burst of radiation from a colossal sunspot region known as AR1944. The sunspot group — which is currently in the middle of the sun as viewed from Earth — is "one of the largest sunspots seen in the last 10 years," NASA officials wrote in a statement. It is as wide as seven Earths, they added.

Tuesday's big flare was an X1.2-class solar event on the scale used to classify sun storms. It occurred at 1:32 p.m. EST (1832 GMT) and came just hours after an M7.2-class flare. Space weather officials at the the Space Weather Prediction Center overseen by NOAA are expecting the flare to spark geomagnetic storms in Earth's magnetic field when a wave of super-hot solar plasma associated with the flare - known as a coronal mass ejection - reaches Earth in the next few days. [Photos: The Biggest Solar Flares of 2014]

"This is the first significant flare of 2014, and follows on the heels of mid-level flare earlier in the day," NASA spokeswoman Karen Fox of the agency's Goddard Space Flight Center in Greenbelt, Md., wrote in a statement. "Each flare was centered over a different area of a large sunspot group currently situated at the center of the sun, about half way through its 14-day journey across the front of the disk along with the rotation of the sun."

X-class solar flares are the most powerful solar storms on the sun. Mid-level storms are dubbed M-class events and can supercharge Earth's northern lights displays, with weaker C-class flares rounding out the top three.

When aimed directly at Earth, the strongest X-class solar flares can pose a risk to astronauts in orbit and interrupt communications and navigation satellite operations.

NASA officials told SPACE.com today that the crew of the International Space Station will not have to take measures to shelter themselves from the solar flare's radiation effects. There are currently six astronauts living on the station as part of the outpost's Expedition 38 crew. The team includes three Russian cosmonauts, two NASA astronauts and one Japanese astronaut.

The sun is currently in an active phase of its 11-year solar cycle. The current cycle, called Solar Cycle 24, began in 2008.

Editor's Note: This story was updated at 9:26 a.m. EST to include new details about the effects of the solar flare for astronauts on the International Space Station and its delay of an Orbital Sciences Cygnus cargo mission to the station from Wallops Island, Va.