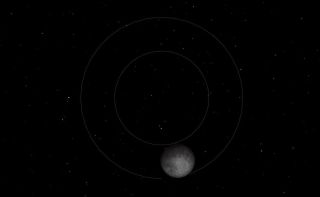 Thursday, April 25. The moon will pass through the outer parts of the moon’s shadow tonight for observers over much of the Eastern Hemisphere. Unfortunately this eclipse will not be visible anywhere in North America.
(Image: © Starry Night Software)

When the moon passes through Earth's shadow today (April 25), it will be at its biggest and brightest for the month and shine near Saturn, too.

In a cosmic coincidence, the April full moon coincides with the first lunar eclipse of 2013 today, which will be primarily visible from Eastern Europe, Central Asia, Africa and Western Australia. But if you don't live in those locations, you can still watch the lunar eclipse live on SPACE.com beginning at 3 p.m. EDT (1900 GMT) today, courtesy of two free webcasts.

Today's partial lunar eclipse will begin at 2:04 p.m. EDT (1804 GMT) and will take about two hours to reach its period of maximum eclipse. The moon will be only partially obscured by the Earth's shadow for this eclipse, so will not be as impressive as a dazzling total lunar eclipse. [How to watch the April 25 lunar eclipse]

Lunar eclipses occur when the sun, Earth and moon align, with the moon passing on the opposite side of the Earth as the sun. Today's eclipse should reach its peak darkness at 4:07 p.m. EDT (2007 GMT) when part of the moon will be in the darkest part of Earth's shadow, the umbra. This will last until about 4:21 p.m. EDT (2021 GMT), according to SPACE.com skywatching columnist Joe Rao.

At least two webcasts, both to be carried by SPACE.com, are available for today's lunar eclipse:

The Slooh Space Camera, a U.S.-based stargazing website, will stream live views of the eclipse from a remotely operated observatory in the Canary Islands, off the west coast of Africa. That webcast will begin at 3 p.m. EDT (1900 GMT) and feature commentary from Slooh's regular broadcast team and solar scientist Lucie Green of the Mullard Space Science Laboratory in the United Kingdom. You can access the webcast directly here: http://www.slooh.com

In Ceccano, Italy, the Virtual Telescope Project run by astrophysicist Gianluca Masi will provide live views of the moon in eclipse beginning at 3:30 p.m. EDT (1930 GMT). You can access it directly here: http://www.virtualtelescope.eu/webtv/

Full moon, eclipse and Saturn, too

The peak of today's lunar eclipse coincides almost to the minute with the April full moon. While the moon can appear full to the unaided eye in the days before and after a full moon, the actual time when the moon is at its biggest and brightest each month is an instantaneous event.

The April full moon has many names. Because it occurs as the northern spring season gets into full swing, it is known as the Seed Moon, Growing Moon and Sprouting Grass Moon in some Native American groups. To the Cree, April's full moon is known as Kiskipizun, or the "Gray Goose Moon." Others have dubbed it the Fish Moon or Pink Moon.

The full moon and lunar eclipse are not the only cosmic attractions in the sky today. Tonight, Saturn will shine close to the moon. It will appear about 4 degrees from the full moon. Your closed fist held at arm's length covers about 10 degrees of the night sky, so Saturn will be slightly less than "half a fist" away from the moon.

Weather permitting, Saturn should appear as a bright, yellow-white, star-like object shining just to the upper-left of the moon. The ringed planet is nearing a point in the night sky called opposition, when it appears directly opposite the sun and will be visible all night long.

Saturn will reach opposition on Sunday (April 28). Stargazers with telescopes may see the planet's dazzling rings tilted 18 degrees, with their northern face in view, according to Rao.

Editor's note: If you live in the observing area of Thursday's lunar eclipse and snap an amazing picture of the moon or Saturn that you'd like to share for a possible story or image gallery, send photos, comments and your name and location to managing editor Tariq Malik at spacephotos@space.com.