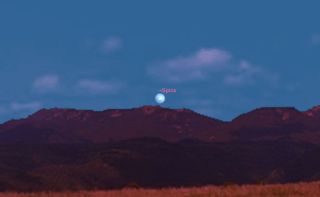 The moon will rendezvous with two bright objects in our current spring evening sky on consecutive nights this week, giving skywatchers a treat.

The first meeting comes on Wednesday (April 24), when Earth's nearest neighbor passes close to the bright star Spica in the constellation Virgo. Then, on Thursday night (April 25), the moon will pass the ringed wonder of the solar system, the planet Saturn.

The Wednesday pairing will be interesting, because it will look a bit different depending on where you’re located. [Amazing Photos of the April Night Sky for 2013]

For those in the eastern part of North America, about an hour after sunset when it will be reasonably dark, you’ll see the nearly full moon rising in the east-southeast, with bluish Spica twinkling just over one degree above it. (Your clenched fist held at arm's length measures about 10 degrees across.)

The moon and Spica actually appeared even closer together — less than 0.5 degrees, which is the apparent width of the moon in our sky — only a couple of hours earlier. Unfortunately, it was still daylight and neither the moon nor Spica was above the horizon at that time.

So when you first see the pair on Wednesday evening, they will be in the process of gradually drawing farther apart. This will be especially evident later on in the night as they get higher in the sky. By around 1 a.m. local daylight time, the moon will have noticeably moved well off to the left of Spica. (As it moves in its orbit around the Earth, the moon shifts to the east at roughly its own width per hour).

And that’s also why those living in the western part of North America will see a much wider gap between Spica and the moon as darkness falls compared to those living farther east – it is, after all, three hours later.

Although Spica is one of the 21 brightest stars in the sky, it will appear a bit overwhelmed by the brilliant light of the moon, which is just one day from full phase. Yet as the moon slowly moves away to the east during the night, Spica may appear to become a bit more prominent.

Even more interesting is the sight that you’ll have if you live in the Caribbean, the northern part of South America, southern Africa or Madagascar.  For observers in those regions, the moon will pass directly in front of Spica — an occultation, as astronomers call it.  To see a map depicting the zone of visibility of this event, along with predictions for nearly 400 locations, see http://www.lunar-occultations.com/iota/bstar/0425zc1925.htm

On Thursday evening, as the full moon rises in the east-southeast sky, it will be accompanied by a very bright yellowish-white “star” shining about 4 degrees to its upper left.

That will be the planet Saturn, just a few days from opposition and shining at a brilliant magnitude of -0.1.  That makes Saturn nearly three times brighter than Spica and equal to the star Arcturus in brightness.

There is a distinct difference between Saturn and Arcturus, though: Although both are of the same brightness, Arcturus twinkles and glimmers with an orange hue compared to Saturn, which shines with a steady and sedate yellowish-white color.

So despite its relative close proximity to the moon, Saturn will stand out better than Spica did on the previous night.

Saturn reaches opposition (180 degrees from the sun) next Sunday (April 28) and will then be visible from dusk until dawn. A telescope will show the rings tilted 18 degrees with their northern face in view. The rings are continuing to open toward a maximum of almost 27 degrees in 2017.

A final note: Some hours before the moon rises for North America on Thursday, a very slight partial lunar eclipse will take place, visible to those in Europe, Africa and much of Asia.

But less than a year from now, on the night of April 14-15, 2014, the moon will undergo a total eclipse, and North Americans will have a ringside seat for that event, as it will occur high in the sky in the middle of the night.

And what’s more, the totally eclipsed moon will be very close to the star Spica, making an eye-catching celestial scene even more spectacular.

Editor's note: If you have an amazing picture of the moon or any other night sky view that you'd like to share for a possible story or image gallery, send photos, comments and your name and location to managing editor Tariq Malik at spacephotos@space.com.