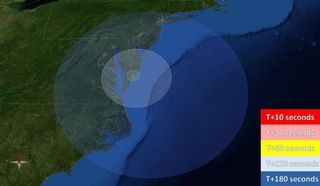 Wondering if you will be able to view the Antares launch in person? The Wallops Mission Planning lab created this visibility map to help answer that question. Liftoff for the rocket is currently set for Wednesday, April 17, at 5 p.m. EDT (2100 GMT). This image was released April 11, 2013.
(Image: © NASA/Wallops Flight Facility)

WALLOPS ISLAND, Va. — An untested commercial rocket is poised to launch into space from Virginia's Eastern Shore on Wednesday (April 17), and you can watch the test flight live online.

The new private Antares rocket, built by the Dulles-based Orbital Sciences Corp., is slated to blast off from NASA's Wallops Flight Facility at the southern tip of this small island at 5 p.m. EDT (2100 GMT). If all goes well, the test flight will pave the way for the future unmanned cargo deliveries to the International Space Station.

NASA will broadcast the launch live on NASA TV beginning at 4 p.m. EDT (2000 GMT) on Wednesday. You can watch the Antares rocket launch webcast on SPACE.com, courtesy of NASA. Visibility maps released by the Wallops facility and Orbital officials suggest that the rocket could be seen from as far north as Portland, Maine, and as far south as Charleston, S.C., weather permitting. [Photos: Private Antares rocket poised for launch]

"The best chance to see the flight extends from about Cape May, NJ southward through the Outer Banks of North Carolina," Orbital officials explained in an update. "Also, if you happen to be in Bermuda, you will likely have a clear view of Antares as it rockets by."

More than 100 reporters are expected to descend upon the NASA Wallops visitor's center on Wednesday, as well as a huge crowd of launch fans, center officials said. More onlookers are advised to watch the launch from the nearby Assateague Beach, NASA Wallops spokesman Keith Koehler told SPACE.com.

"It's going to be a bright light in the sky," Koehler said.

The rocket will lift off from Pad 0A at the Mid-Atlantic Regional Spaceport, a commercial spaceport at the Wallops Flight Facility. The Wallops facility, established in 1945, is NASA's lead center for small suborbital rocket launches and balloon science missions.

The two-stage Antares rocket is designed to launch Orbital's cylindrical unmanned cargo ship, called Cygnus, on at least eight delivery flights to the International Space Station under a $1.9 billion deal with NASA. Orbital is one of two companies with a NASA contract for space station cargo deliveries. The other is Space Exploration Technologies (SpaceX) of Hawthorne, Calif., which has launched one test flight and two cargo delivery missions to the station since 2012 under a separate $1.6 billion contract.

For Orbital Sciences, Wednesday's launch is the first major flight test for the Antares rocket. The two-stage rocket is 131 feet (40 meters) tall and about 12.7 feet (3.9 m) wide and will launch toward the southeast out over the Atlantic Ocean during the 10-minute flight.

The upcoming Antares test flight will not carry a Cygnus spacecraft. Instead, it will carry a mock payload, called a "mass simulator," to mimic a Cygnus vehicle, including three tiny satellites for NASA and one commercial nanosatellite.

Orbital engineers replaced a faulty valve on the Antares rocket after it halted an engine test on Saturday (April 13). With the fix in place, Orbital officials and NASA are now tracking the weather for Wednesday's test.

"There is a 45 percent chance of favorable weather at the time of launch," NASA officials said in a statement late Monday (April 15). "Low clouds are the primary concern for a weather violation."