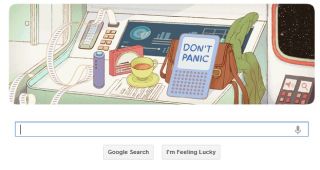 Although author Douglas Adams said, "So long and thanks for all the fish" to this mortal coil 12 years ago, this mostly harmless world still remembers him and his contributions to the science fiction canon. In honor of his hilarious "Hitchhiker's Guide to the Galaxy" series, Google has designed a unique doodle for what would have been Adams's 61st birthday. To access it, just go to Google's front page; it's available in a variety of countries and languages.

The doodle, replacing the familiar "Google" name on the search engine's website, incorporates a number of elements that any fan of the books, radio dramas or screen adaptations will recognize. A prominent "Hitchhiker's Guide" (looking suspiciously like a Kindle) proclaims "Don't Panic," laid against protagonist Arthur Dent's towel and the pocketbook of the book's female lead, Trillian.

Clicking on the eponymous guide activates an animated manual explaining the workings of a Babel Fish (a curious creature that wriggles its way into a host's ear and translates any language), while a cup of a liquid that is almost, but not quite, entirely unlike tea sits next to these trappings. Even the misanthropic Marvin the Paranoid Android shows up, although finding him involves a little detective work. [See also: 10 Profound Innovations Ahead]

In case any readers out there have missed out on "The Hitchhiker's Guide to the Galaxy," it remains a classic of smart sci-fi humor. The book tells the story of Arthur Dent, a long-suffering everyman who improbably finds his way aboard a spaceship, meets the outrageous denizens of the universe, and saves the Earth, almost entirely by accident. Along the way, Adams works in some very sly criticism of anthropocentrism, organized religion and the English language itself.

Adams, English by birth and American by citizenship, was born on March 11, 1952. After a routine workout, he suffered a heart attack and died on May 11, 2001 at the age of 49. A prolific writer to the end, Adams left a number of unfinished projects behind, which other authors have done their best to complete in the last decade.

The doodle is bittersweet, reminiscent of both Adams's delightful stories and his untimely death. It's hard to believe that over a decade has passed since Adams died, but any hoopy frood ("Hitchhiker's Guide" slang for a very composed person) knows that time is an illusion. Lunchtime doubly so.