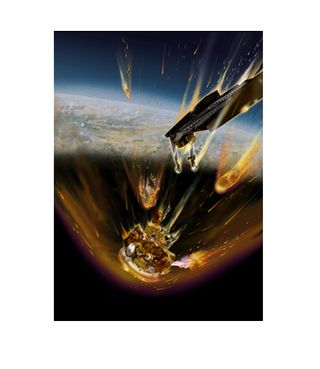 Russian space industry officials say the United States may have accidentally destroyed Russia's most expensive and ambitious space mission since the Soviet era. But the accusation doesn't hold up to scrutiny.

Officials at Roscosmos, the Russian space agency, told newspapers that radar signals sent into space by the U.S. might have caused the catastrophic failure of its Phobos-Grunt probe, a spacecraft that was intended to go to one of Mars' moons but instead went haywire shortly after its Nov. 9 launch, got stuck in Earth's orbit, and finally crashed into the Pacific Ocean Sunday (Jan. 15).

They said the probe's electronics could have been damaged when the spacecraft flew through powerful radar from a U.S. station in the Marshall Islands, which they said was being used to track an asteroid at the time. "There is a possibility that [Phobos-Grunt] accidentally entered the area covered by the radar, which resulted in a failure of its electronics caused by a megawatt impulse," a space industry source told the Russian newspaper Kommersant.

U.S.-based radar astronomers say Russia's accusation is not at all plausible. For one thing, said Martin Slade of NASA's Jet Propulsion Laboratory, "there is no asteroid-tracking radar in the Marshall Islands."

Furthermore, the Phobos-Grunt probe was in low-Earth orbit, at an altitude of 200 kilometers (120 miles), when it started to malfunction. Even if radar were being emitted and received in the Marshall Islands, "radar cannot interfere with electronics at that altitude," Slade told Life's Little Mysteries. [Why Must Electronic Devices Be Turned Off During Takeoff?]

In fact, it's unlikely that the probe encountered any beam strong enough to damage its systems. Jean-Luc Margot, an astronomer at the University of California, Los Angeles, calculated the amount of radiation that the Phobos-Grunt probe would have (hypothetically) experienced had it accidentally crossed through the most powerful radar beam in the world — the one emitted by the Arecibo Observatory in Puerto Rico.

"The amount of exposure is about 10,000 times less than the level that is considered safe for humans by the FCC," Margot said.

For more evidence that radar is an unlikely culprit, consider that commercial jets routinely pass through these radar beams, and because they fly at much lower altitudes than the space probe, they experience beams with power densities 400 times higher than the beam the probe would have experienced, Margot said. For these reasons, he finds the idea that crossing a radar beam would have damaged the Russian spacecraft "very difficult to believe."

According to Slade, a much more likely explanation for the probe's failure is outlined at RussianSpaceWeb.com, an English-language website based in Russia. The website cites a brief that was supposedly leaked from space industry sources to the online forum "Novosti Kosmoavtiki" today (Jan. 17). [The Worst Space Debris Events of All Time]

"The most likely culprit in the failure of the probe's propulsion unit to ignite soon after it had entered orbit on Nov. 9 was a programming error in the flight control system," the site states. "Post-failure tests (apparently simulating in-flight conditions) revealed that in 90 percent of cases, the processor of the main flight control computer onboard the spacecraft would be overloaded. It could easily lead to [computer] crashes and rebooting as more systems were being activated after the spacecraft had left the range of Russian ground control stations after reaching orbit."

Following the initial system crashes, the leaked brief suggests, new problems arose. A transmitter onboard the probe was running extremely inefficiently, consuming 200 watts of power for every 40 watts it transmitted. "As a result, the probe slowly drained its rechargeable power batteries and then its emergency power source, … leading to a complete deactivation of onboard systems on Nov. 28, 2011," the website states.

The dead craft orbited for nearly two months before plunging back to Earth.