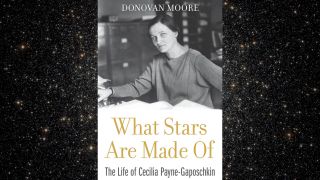 "What Stars Are Made Of" by Donovan Moore.
(Image: © Harvard University Press)

It was a major scientific scandal: Established astronomers insisted the sun was made of the same mix of elements as Earth's crust, only to have a female graduate student publish a meticulous dissertation arguing that they were entirely wrong, that stars are made primarily of hydrogen.

She was right, and with her 1925 dissertation, Cecilia Payne, later known as Payne-Gaposchkin, earned a place in science history. But her story is still little known, and nearly a century after her stunning research, former journalist and retired banker Donovan Moore stumbled on a painting of Payne-Gaposchkin and fell down a rabbit hole.

The result of this research is his book, "What Stars Are Made Of: The Life of Cecilia Payne-Gaposchkin" (Harvard University Press, 2020). Space.com talked with Moore about how the book came to be and why he was so invested in telling Payne-Gaposchkin's story. This interview has been edited for length and clarity.

Related: Read an excerpt from "What Stars Are Made Of"
More: Best space and sci-fi books for 2020

Space.com: How did you decide to write this book?

Donovan Moore: [A friend] arranged to send me the materials from a course that he was auditing at Princeton that was called The Universe. So he sent it to me, and I'm leafing through it, and I get to this page, it has three photographs on the page, no names, just three photographs. I recognized the two men, Aristotle and Newton. Who's the woman, literally on the same page as these eminent scientists?

So I started to poke around as to who she was, and the more I poked, the more intrigued I became. It was this amazingly inspirational story of a woman who had to overcome unbelievable obstacles — personal, professional, academic — in order to make one of the most fundamental discoveries in all of science, and no one had written a book about her. I decided I would be the person who would write that book.

Space.com: What was the research for this project like?

Moore: I immediately started researching and what I did was I read her memoirs and I pored over old photographs that her daughter, Katherine Haramundanis, she was very helpful to me, she supplied me with the photographs.

I went to Cambridge, England, because that's where Cecilia went to school. And I went to the university there and I spent about a week there and I didn't rent a car, I rented a bicycle because I wanted to see what it was like for Cecilia back in the 1920s. And so I biked all over Cambridge University day and night to the Cavendish Laboratory to Trinity Hall to the Cambridge Observatory, just as she did.

I came back home, I spent a lot of time in the Harvard archives and hired a researcher to help me with that. And finally, after a good bit of that kind of research, I had enough to sit down and write the manuscript. So that's what I did, I just sat down and wrote it.

Space.com: You don't have a strong background in astronomy — why did you want to write a book about an astronomer, what drew you to Cecilia Payne-Gaposchkin as a biography subject?

Moore: I was always interested in science. … When I wrote this, I was not a professor and I was not a historian. All I really was was a writer looking for a good story. … I wrote it because it was such a compelling story. And so it is, on one level, a very meticulously researched biography. …

But on another level, it's really a narrative about the basic human need to understand, to figure out something and to explain it. Cecilia had a relentless need to know, and it's really what drove her. She was derided in class, she was paid poorly. She was denied a teaching credit, she was told she was wrong, all those things. None of that mattered, she just stepped on every obstacle, because she simply had this driving need to understand. So that really puts the book on a whole other level than just a description of someone's life. …

Space.com: You cover her education and doctorate in a lot more detail than her later career. Why is that, and could you talk a bit about what she was working on later in life?

Moore: Half of the book is really her time in England and Cambridge. That was [full of] really good examples of what I'm talking about, of having to overcome obstacles. She took physics at the classroom in the Cavendish Laboratory. The head of the lab was Ernest Rutherford, who was a Nobel-winning scientist in chemistry, and he would start off each class looking right at Cecilia.

She was the only woman in the class and, as a woman, she was required to sit in the front row. So he would start every class with ladies and gentlemen looking right at her and all the boys would stamp their feet and howl with laughter. It's that kind of drama that drew me to the story. She had to put up with that. Because she needed to learn, she needed to understand.

Before she even got to Cambridge she was kicked out of school for her need to understand and it kind of flew in the face of the Catholic school that she was in. There's one really nice anecdote in the book about how she asked a London bookbinder to take the writings of Plato, bind them and put on the spine "Holy Bible," so that her teachers would think that she was studying her religion instead of reading Plato.

It's that kind of anecdotal stuff that really developed her as a person. So that's why I spent a fair amount of time on that part of her life. After she wrote her thesis and was told she was wrong, when in fact she was absolutely correct. Her work after that, [Harlow] Shapley, who ran the Harvard Observatory, he kind of forced her to do more work in classifying variable stars and things like that, which was not quite as interesting, at least to me, as the work that she was doing studying stellar spectra. So I kind of went quickly through that.

After that, when she spirited her husband-to-be out of Germany, that was very interesting.

Space.com: What was your favorite thing you learned about Payne-Gaposchkin and her work while writing the book?

Moore: What I learned was: be careful making judgments. Because she was a little, 24-year-old, 25-year-old woman graduate student. And no one thought someone like that could make the kind of discovery that she made. What was really going on here is that it was a very interesting time in science because physics was just emerging as a form of study. There were these scientists who were taking physics and they were combining it with other disciplines to really make unbelievable discoveries. So, Rutherford, for example, he fused physics with chemistry to understand the nucleus of an atom and Niels Bohr fused physics with the quantum theory to understand the molecular structure and Einstein fused physics with mathematics to produce his theory of relativity.

So what she was doing was fusing physics with astronomy to understand what stars are made of. And that was really the birth of astrophysics. By looking down at these glass plates, she was able to do what centuries of astronomers tried to do by looking up through telescopes. And because she had this knowledge of physics, she was able to peer, so to speak, more deeply into the universe than the established men of science.

They did not have the same training in physics that she did. And so, when she was able to peer more deeply and did make a fundamental discovery, they could not grasp it and they could not believe it. And so they really didn't even follow up on her discovery. Had she been a man, I have no doubt that she would have triggered follow-up research.

It was obviously frustrating for her. She was very careful in her thesis, she wrote "my results are almost certainly not real." … She was very careful how she worded it because she wanted it to be known right or wrong, that she was the one to make that discovery. That's very dramatic stuff for a book.

Space.com: Why do you think this is an important story to tell now?

Moore: I think it's really important for women and young girls in science. … The problems that you come across don't care what your gender is, they don't care. They don't care if you're a man or a woman, you're black or white, you're old or young.

What the problem cares about is can your brain wrap itself around what you're trying to figure out and understand it? And that is a very powerful thing, if you think that through. Men also have to read this book and understand that the ability to perceive, to discover, to understand is not gender-specific. I hope that's what comes through in the book.

Space.com: What do you hope people take away from reading the book?

Moore: I would like the book to be perceived, as I said before, as more than just a simple biography. It's really a slice of history that I was describing. And really that need to understand is so it's so ingrained in people and it's so important.

You can buy "What Stars Are Made Of" on Amazon or Bookshop.org.