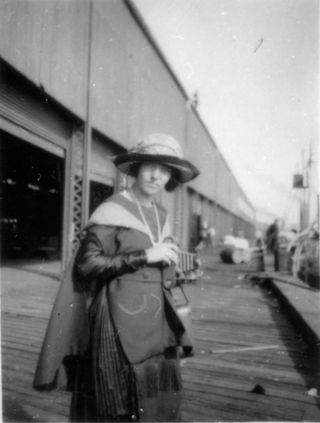 Ninety years ago today (Feb. 18), astronomer Clyde Tombaugh gathered the data that proved the existence of what would eventually be dubbed Pluto — but it wouldn't have been possible, astronomers have since realized, without the calculations of a mathematician whom history has forgotten.

That mathematician was Elizabeth Williams, who worked for astronomer Percival Lowell, who first theorized the existence of a ninth planet. Lowell died before his successor, Tombaugh, finally spotted the elusive Pluto, but both men relied on calculations that Williams made. But the math got lost in the discovery it enabled, and so did Williams.

"There isn't much about her, which is very unfortunate," Catherine Clark, a doctoral student in astronomy at what's now known as Lowell Observatory, told Space.com. "There's so much about Percival Lowell and Clyde Tombaugh, and not so much about the computers who were actually doing the day-to-day calculations."

Related: Photos of Pluto and its moons

Those calculations were vital for the quest that eventually resulted in Tombaugh identifying Pluto. The logic motivating the search was based on observations of Neptune and Uranus. "Percival Lowell first noticed that the orbits of Neptune and Uranus were not exactly what they should have been," Clark said. When Lowell saw those differences, he knew that astronomy's map of the solar system was incomplete.

But finding the missing world required math — very complex math, and that's where Williams and other mathematicians came on the scene. Before the invention of calculators, so-called human computers — often women, since it was unglamorous work — did all the complex math that astronomers required, by hand. For Lowell's research, Williams calculated where he should look for how large of a missing object, all based on the discrepancies in the orbits of Neptune and Uranus.

Lowell never spotted Pluto, and the quest languished for a few years before Tombaugh picked up the work. And then, there it was: In 1930, those calculations paid off when Tombaugh caught sight of an object moving through the solar system. "There's a specific result that came of her calculations, so that's pretty exciting," Clark said.

But Williams wasn't there to see it, Clark said. In 1922, Williams had married and Lowell's widow had fired her because she felt it inappropriate to employ a married woman. The pair took jobs at a Harvard observatory in Jamaica. In 1935, Williams was widowed herself and moved to New Hampshire, where she died in poverty.

Clark gave a presentation about Williams and her work at the 235th meeting of the American Astronomical Society in Honolulu last month based on her collaboration with Lowell Observatory historian Kevin Schindler. She told Space.com that what stood out to her about Williams' story was "understanding where women first came into this field and what they were allowed to do in the very beginning. And also just these crazy calculations that I don't think I could do by hand."

Williams herself was particularly talented in her work, Clark added. "On top of these incredible calculations, really advanced math that she was doing, she was also ambidextrous and writing simultaneously with both hands," she said. "She would write in cursive with her right hand while printing with her left."

Decades after Williams' work, of course, astronomers don't need humans to calculate orbital mysteries. "We rely so heavily on modern machine computers these days to do our work and we're able to do some really crazy awesome science with that," Clark said. But learning how astronomers worked in the past, she said, "really takes you back to the history of it and makes you grateful and thankful for these people, particularly these women, who were doing these calculations in the first place."

The erasure of Williams' work is also a reminder of the ways that women have been excised from the story of the history of science. "Even though they were in the shadows," Clark said, "[women] were contributing to this field."