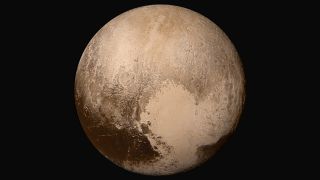 On July 14, 2015, NASA's New Horizons spacecraft made history. It became the first probe ever to fly by the dwarf planet Pluto and its moons. We're celebrating the epic feat with some of the most amazing images from the Pluto encounter, even as New Horizons looks ahead to an even more distant rendezvous at the edge of the solar system. Click the arrows to see the best photos from (at Pluto and on Earth) from New Horizons' encounter.

Just 15 minutes after its closest approach to Pluto on July 14, 2015, NASA’s New Horizons spacecraft looked back toward the sun and captured this near-sunset view of the rugged, icy mountains and flat ice plains extending to Pluto’s horizon. The smooth expanse of the informally named icy plain Sputnik Planum (right) is flanked to the west (left) by rugged mountains up to 11,000 feet (3,500 meters) high.

Pluto's haze layer shows its blue color in this picture taken by the New Horizons Ralph/Multispectral Visible Imaging Camera. The high-altitude haze is thought to be similar in nature to that seen at Saturn’s moon Titan. The source of both hazes likely involves sunlight-initiated chemical reactions of nitrogen and methane, leading to relatively small, soot-like particles called tholins that grow as they settle toward the surface.

Scientists have assembled this high-resolution color view of one of two potential cryovolcanoes spotted on the surface of Pluto by the New Horizons spacecraft in July 2015. This feature, known as Wright Mons, was informally named by the New Horizons team in honor of the Wright brothers. At about 90 miles (150 kilometers) across and 2.5 miles (4 kilometers) high, this feature is enormous. If it is in fact an ice volcano, as suspected, it would be the largest such feature discovered in the outer solar system.

This composite of enhanced color images of Pluto (lower right) and Charon (upper left), was taken by NASA’s New Horizons spacecraft as it passed through the Pluto system on July 14, 2015. This image highlights the striking differences between Pluto and Charon. Pluto and Charon are shown with approximately correct relative sizes, but their true separation is not to scale. The image combines blue, red and infrared images taken by the spacecraft’s Ralph/Multispectral Visual Imaging Camera.

Members of the New Horizons science team react to seeing the spacecraft's last and sharpest image of Pluto before closest approach later in the day on July 14, 2015 at the Johns Hopkins University Applied Physics Laboratory (APL) in Laurel, Maryland.

This highest-resolution image from NASA’s New Horizons spacecraft reveals new details of Pluto’s rugged cratered plains, including the layering in the interior walls of many craters. Layers in geology usually mean an important change in composition or event, but at the moment New Horizons team members do not know if they are seeing local, regional or global layering. The origin of the many dark linear features trending roughly vertically in the bottom half of the image is under debate, but may be tectonic. Most of the craters seen here lie within the 155-mile-wide (250-kilometers) Burney Basin, which is informally named after Venetia Burney, the English schoolgirl who first proposed the name "Pluto" for the newly discovered planet in 1930.

High-resolution images of Pluto taken by NASA’s New Horizons spacecraft just before closest approach on July 14, 2015 reveal details down to scales of 270 meters. In this 75-mile (120 kilometers) section taken from a larger, high-resolution mosaic, the textured surface of a plain surrounds two isolated ice mountains.

This 220-mile-wide (350 kilometers) view of Pluto from NASA’s New Horizons spacecraft illustrates the incredible diversity of surface reflectivities and geological landforms on the dwarf planet. The image includes dark, ancient heavily cratered terrain; bright, smooth geologically young terrain; many mountains; and a mysterious field of dark, aligned ridges that resemble dunes whose origin is under debate. The smallest visible features are 0.5 miles (0.8 km) in size. This image was taken as New Horizons flew past Pluto on July 14, 2015, from a distance of 50,000 miles (80,000 km).

New Horizons scientists made this false-color image of Pluto to highlight the many subtle color differences between Pluto's distinct regions. The image data were collected by the spacecraft’s Ralph/MVIC color camera on July 14, 2015, from a range of 22,000 miles (35,000 kilometers).

Members of the New Horizons science team react to seeing the spacecraft's last and sharpest image of Pluto before closest approach later in the day on Tuesday, July 14, 2015 at the Johns Hopkins University Applied Physics Laboratory (APL) in Laurel, Maryland.