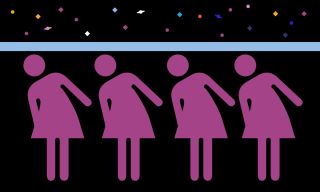 Women of color experience more discrimination and harassment in astronomy and space science compared to other groups, according to a 2017 study.
(Image: © Space.com)

A new study examining discrimination and harassment in the field of astronomy shows that women of color are far more likely to feel unsafe at work because of their gender and race than other groups.

The study analyzed data from a survey carried out between 2011 and 2014, in which more than 450 astronomers and space scientists were asked about instances of discrimination or harassment against themselves or others based on gender or race. The study was published Monday (July 10) in the Journal of Geophysical Research.

This appears to be the first large-scale, quantitative study of gender and race-based discrimination and harassment in astronomy, according to Kathryn Clancy, an anthropologist at the University of Illinois at Urbana-Champaign and lead author of the new study. However, Clancy told Space.com that the study's conclusions are not surprising, and that they reflect decades of research that have chronicled the struggles of women and, in particular, women of color in the sciences.

"On the one hand, I'm so grateful and so glad that this paper is getting attention," Clancy said. "And I think for a lot of people who care about this work, and who do on-the-ground grassroots activism around this, I think its validating that this work now exists. But my guess is that it’s a bittersweet feeling as well, because why wasn't anyone listening to them all the other times that they talked about this?"

Clancy said the prime focus of the survey was to understand the extent to which "negative workplace experiences … actually affect the work that [people] do." To that end, the survey asked responders if they had ever felt unsafe at work due to do their gender or race, and if they had skipped work or school-related events because they felt unsafe, or because of discrimination or harassment.

The survey was initiated by two of the study's co-authors, Erica Rodgers, a research scientist at the Space Science Institute, and Christina Richey, a NASA astrophysicist who serves as chair of the American Astronomical Society's Committee on the Status of Women in Astronomy. Clancy, whose area of research includes social science, provided some guidance to help the two astronomers make the survey meet standards for a scientific study. (Clancy was also a co-author on a study about sexual harassment in the field of anthropology.)

Over four years, the researchers gathered responses from astronomers ranging from undergraduate students to retired academics, and including nonacademic astronomers. Responders were asked to identify themselves as belonging to one of seven different racial categories, one of three gender categories (including nonbinary), and one of two gender-identity categories (cisgender and transgender). The survey did not provide significant data on the experiences of non-cisgender or nonbinary members of the community.

For most questions, responders were asked only about events that had occurred in the last five years. Overall, 88 percent of respondents reported having heard racist or sexist remarks about someone from their peers; 59 percent reported hearing such comments from superiors; 39 percent of responders reported experiencing verbal harassment at their current job; and 9 percent reported experiencing physical harassment at their current job.

When comparing women and men, the study found that "women were … significantly more likely than men to report that they experienced both verbal and physical harassment because of their gender."

"Across nearly every comparison, women of color experienced the most hostile environment, from the negative remarks observed to their direct experiences of verbal and physical harassment," the authors wrote. "These findings are consistent with workplace literature that places women of color in double jeopardy, as they occupy a space of being at greater risk of both gendered and racialized harassment."

There are about 10,000 people working in astronomy and related fields in the U.S. and about 20,000 worldwide, according to the American Astronomical Society. Clancy said that from a social scientist perspective, the results of the survey cannot be said to represent the entire astronomy community.

"So instead, what we can do is we can speak from this population, and we can say that this is not a nonrandom sample," she said, meaning the survey was open to anyone in the community and the respondents were not selected by the researchers. "At the same time, there's a good chance [the survey] is fairly representative."

Clancy said people who aren't familiar with social science will often ask if those who have experienced gender and racial discrimination are more likely to respond to surveys of this kind. But based on previous research, Clancy said the inverse is more likely true.

Researchers have spent decades examining how discrimination and a hostile work environment affect the physical and mental well-being of employees, the authors wrote. These things also impact the quality of science produced by an individual and the trajectory of that individual's career, Clancy said.

"Literally almost half of our sample of women of color didn't feel safe in their workplace. Just sit with that for a minute," Clancy told Space.com. "Think about what kind of work you can get done if you dread going to work or if you feel unsafe going to work. Think about the ways in which it disrupts the process of science if your heart and mind can't be fully in your workplace because it is hostile. Think about the discoveries that are left undiscovered."

Clancy said there have been studies examining how discrimination not only affects individuals but also entire scientific teams. Teams with more diversity across different metrics "solve problems better and faster" than teams with very little diversity, Clancy said. A 2014 study showed that scientific laboratories in which women were not included in social networks with their coworkers tended to produce fewer papers and received fewer grants than labs in which women were included in social networks. That study also showed that people within scientific laboratories often apply stereotypes to each other and tend to undermine women's expertise more than men's; thus, even though a woman might be more qualified to tackle a particular problem, her colleagues might assign it to a less-qualified person, ultimately slowing progress on that problem or diminishing the quality of the work, Clancy said.

When scientists skip events such as seminars, classes or fieldwork activities, the loss of information or data poses an obvious detriment to the individual. But missing these events can have other negative impacts, Clancy said. Science is a highly collaborative field, Clancy said, so interacting with colleagues and peers can have a direct impact on a person's research and career. In addition, if a person misses a group activity, it can be interpreted by superiors or colleagues as that person "not being enough of a team player," she said. [Women in Space: A Space History Gallery]

Clancy said she thinks many scientific institutions and schools have "given lip service to diversity," but may not have worked hard enough to combat discrimination and harassment, particularly against women of color. While Clancy said the number of white women in the sciences has shown an overall increase over time, the number of women of color in astronomy faculty positions began to decline in 2015.

"Because we refuse to engage with issues of race in the sciences and acknowledge the ways in which racism might actually be limiting women of color — and probably also men of color — we're continuing basically to see increases in the number of white women in the sciences, while not seeing improvements in any other demographic," Clancy said.

The paper cited multiple studies that investigate how institutions can confront this problem, including a 2013 report from the National Academy of Sciences. The steps recommended by the 2013 report include implementing a clear code of conduct for employees, and effectively sanctioning behavior that violates that code. In addition, universities and workplaces can choose to conduct "values-based, affirmative" diversity training, which calls on workplace leaders to discuss what it means to treat colleagues ethically and to create a specific code of conduct for their workplace. Clancy notes that this type of training can be time-consuming and challenging, but has been shown to be more effective at changing workplace environments than training focused on what employees should not to do.

"Yes, it takes longer to decide to sit people down and decide to have those kinds of conversations," Clancy said. "But if you actually want to affect change you have to do the right thing, not the easy thing."