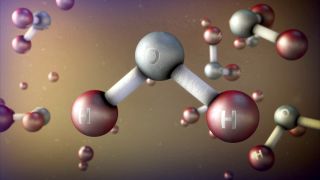 The strict ratios of elements that combined into other elements gave scientists a clue that matter might have distinct component parts, now called atoms.
(Image: © NASA's Goddard Space Flight Center)

Paul M. Sutter is an astrophysicist at The Ohio State University, host of "Ask a Spaceman" and "Space Radio," and author of "Your Place in the Universe" (Prometheus Books, 2018). Sutter contributed this article to Space.com's Expert Voices: Op-Ed & Insights.

The concept had been floating around off and on for a few millennia. Ancient cultures were certainly aware of of the general idea that matter was composed of more fundamental elements (though they disagreed quite a lot about what exactly counted as an element) and knew that these elements combined in interesting and fruitful ways to make complex things, like chairs and beer. But through those millennia, the question persisted: If I isolated a single element and chopped it in half, then chopped those halves in half, and so on and so on, would I eventually find a smallest possible bit of element that I could no longer chop? Or would it go on for infinity?

Related: What Is an Atom?

After years of careful examination, Dalton found a surprising relationship among the elements. Sometimes, two elements can combine to form various compounds in multiple ways with different ratios, like tin and oxygen can do. But the proportions of each element in the various combinations always reduced to very small numbers.  If matter was infinitely divisible, with no smallest possible bit, then any proportion ought to be allowed.

A hundred years later, this "atomic" theory of matter didn't seem completely nonsensical. One of the most challenging things about it, however, was that if atoms really existed, they were way, way too small to see. How could you prove the existence of something you couldn't directly observe?

One clue to the existence of atoms came from the newly established studies of thermodynamics. In order to understand how heat engines worked — along with all the attendant concepts like temperature, pressure and entropy — physicists realized that they could view gases and fluids as if they were composed of a nearly numberless quantity of tiny, even microscopic, particles. For example, "temperature" really measures the average motion of all those gas particles hitting your thermometer, transferring their energy to it.

This was pretty compelling, and Albert Einstein was a big fan of these kinds of physics. Just like all the other physics that he became a fan of, Einstein revolutionized them.

He was interested, in particular, by the problem of Brownian motion, first described way back in 1827 by Robert Brown (hence the name). If you drop a large grain inside a fluid, the object tends to wiggle and jump around completely on its own. And after a few carefully executed experiments, Brown realized that this has nothing to do with air or fluid currents.

Brownian motion was just one of those random unexplained facts of life, but Einstein saw in that a clue. By treating the fluid as something composed of atoms, he was able to derive a formula for how much the innumerable collisions from the fluid particles would nudge that grain around. And by putting this connection on solid mathematical ground, he was able to provide a pathway for going from something you can see (how much the grain moves around in a given amount of time) to something you can't (the mass of the particles of the fluid).

In other words, Einstein gave us a way to weigh an atom.

And just when people were getting comfortable with the size of these minuscule morsels of matter, thinking that these had to be the smallest things possible, someone came along to complicate it.

Operating in parallel with Einstein was a wonderfully gifted experimentalist by the name of J.J. Thomson. In the late 1800s, he become enraptured with ghostly beams of light known as cathode rays. If you stick a couple electrodes inside a glass tube, suck all the air out of the tube, then crank up the voltage on the electrodes, you get an effervescent glow that appears to emanate from one of the electrodes, the cathode, to be exact. Hence, cathode rays.

This phenomenon raised questions for physicists. What made the glow? How were charges — which, at the time, were known to be linked to the concept of electricity but otherwise mysterious — connected to that glow? Thomson cracked the code by a) making the best dang vacuum tube that anyone ever had and b) shoving the whole apparatus inside superstrong electric and magnetic fields. If charges were somehow involved in this cathode ray business, then you'd better believe they'd listen to those fields.

And listen they did. The cathode ray would bend under the influence of both electric and magnetic fields. Fascinating! That meant that the glowy bit was connected to the charges themselves; if the light was somehow separate from the charges, then it would sail straight on through, regardless of the field interference. And it also meant that cathode rays were made of the same stuff as electricity.

By comparing the amount of ray deflection in the electric fields versus in the magnetic fields, Thomson could derive some math and work out some properties of these charges. And here's where J.J. earned his Nobel Prize: These "corpuscles" (his word) were about 2,000 times smaller than hydrogen, the lightest known element and therefore the smallest atom. These "electrons" (everybody else's word) were truly remarkable.

It was up to the next generation of scientists to settle the puzzles raised by Thomson's results. Most importantly: How can something be smaller than an atom, and what does that mean for the structure of atoms themselves?

It was Thomson's own former student Ernest Rutherford, together with his own students Hans Geiger and Ernest Marsden, who decided to shoot things at gold to see what would happen. The scientists chose gold because they could make very thin sheets of the material, meaning the gang could rest assured that they were probing atomic physics. And they shot very tiny bullets: alpha particles, which are charged atoms of helium. These particles are small, heavy and fast — the perfect scientific bullets.

As the researchers engaged in target practice, most of the alpha particles sailed on through the gold as if it were tissue paper. But every once in a while, the particles would careen off in a random direction. And once in a great while (about 1 out of every 20,000 shots, and yes, the scientists counted manually), an alpha particle ricocheted off the gold, slammed back the way it had come.

Related: The 5 Most Ingenious Experiments in Astronomy and Physics

Amazing! What were these little particles telling us about gold atoms? The only explanation that made sense, the researchers concluded, was that the vast majority of the mass of the atom was concentrated in a very small volume. And this "nucleus" must be positively charged. Since the total charge of the atom had to be neutral, then the electrons must be very very tiny and swimming, orbiting or dancing around that nucleus in a loose cloud.

So, when the alpha particles blasted through, they almost always encountered just plain empty space. But a severely unlucky particle might glance off — or worse, hit head-on — the nucleus, dramatically altering the bullet's trajectory.

Thus, almost a hundred years after Dalton conclusively argued for the existence of the indivisible atom, and at the same time as Einstein was providing a way to directly measure those atoms, Thomson and Rutherford discovered that the atom wasn't indivisible at all. Instead, it was made of even tinier bits.

So, at the same time we solidified atomic theory, we got our first taste of the subatomic world. From there, it got a lot messier.

Learn more by listening to the episode "How Did We Figure Out That Stuff Is Made Of Atoms?" on the "Ask a Spaceman" podcast, available on iTunes and on the web at http://www.askaspaceman.com. Thanks to Bill S. for the questions that led to this piece! Ask your own question on Twitter using #AskASpaceman or by following Paul @PaulMattSutter and facebook.com/PaulMattSutter. Follow us on Twitter @Spacedotcom and on Facebook.