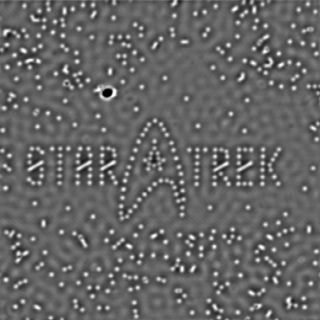 The nanophysicists working at IBM appear to be Trekkies.

In honor of the iconic science fictoin franchise's latest film "Star Trek: Into Darkness" — set for release on May 17 — IBM has unveiled amazing new photos crafted from the microscopic movements of single carbon atoms.

"Scientists used a microscope the size of a room to maneuver single atoms to form the shapes of the Enterprise, the Vulcan salute, the Star Trek logo, a U.S.S. Enterprise the height of a single nanometer, and an animation of the Star Trek logo," IBM officials said in a statement.

Scientists used a scanning tunneling microscope — a 2-ton machine invented at IBM — to arrange and photograph the atoms. Engineers carefully dragged a sharp needle along a copper surface to attract the atoms and move them into place.

That video, "A Boy and His Atom," shows a group of carbon atoms arranged in the shape of a boy dancing and jumping on a trampoline with a single atom beside him.

These artistic endeavors are part of a wider IBM data storage initiative. Single atoms are the smallest raw materials that can be used to store data. Investigating how to use atoms on various surfaces can help scientists understand how they can be used to store information in more efficient ways, according to IBM officials.

"Today, it takes roughly one million atoms to store a single bit of data on a computer or electronic device," IBM officials wrote on the company's website. "A bit is the basic unit of information in computing that can have only one of two values, one or zero. Eight bits form a byte. Recently, IBM Research announced it can now store that same bit of information in just 12 atoms."

A chip the size of a fingernail using the 12-atom bit could store all of the movies ever made, IBM officials said in a statement.

"Star Trek Into Darkness" is scheduled for nationwide release in the United States on May 17.