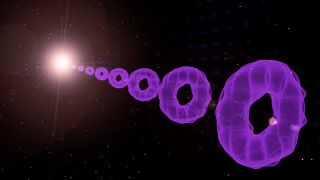 Researchers experimenting with ultracold atoms have observed behavior that bears a striking resemblance to the rapid, exponential expansion of the early universe — an epoch that cosmologists call the period of cosmic inflation.

Ultracold atoms can be used to emulate complex, condensed-matter systems that are hard to study experimentally, like supersolids, superconductors or even black holes.

So, in the new experiment, several hundred thousand sodium-23 atoms were cooled to temperatures low enough that the atoms formed a Bose-Einstein condensate (BEC). This is an exotic, gas-like cloud of atomic particles kept close to absolute zero (about minus 459.7 degrees Fahrenheit, or minus 273.2 degrees Celsius). [The Universe: Big Bang to Now in 10 Easy Steps]

Researchers used lasers to contain the cloud in a doughnut-like shape, the radius of which was increased by a factor of up to four over a span of mere milliseconds, causing the BEC to expand at supersonic speed.

"Cosmological expansion is central to our understanding of the universe," study team member Gretchen Campbell, of the Joint Quantum Institute at the University of Maryland, told Space.com.

In several sets of experiments, the researchers imprinted a sound wave onto their cloud — alternating regions of more atoms and fewer atoms around the ring to simulate a wave in the early universe — and watched it disperse during expansion. Unsurprisingly, the sound wave stretched out, but its amplitude also decreased. The growth happened so fast that the cloud was left humming;d a similar hum may have appeared on cosmic scales during the period of inflation, researchers said.

"Our knowledge of this expansion is limited to what we can learn by observation, because creating a universe in a laboratory is, understandably, a bit difficult," Campbell said. "One potential laboratory stand-in for the universe is an expanding BEC, an exotic state of ultracold matter where the wave functions of atoms overlap and the atoms behave as one."

After the rapid period of inflation ended, energy contained in the quantum field that drove the inflation decayed into lower-energy particles. This in turn caused reheating, an important process that presumably produced the high-temperature state of matter that preceded the formation of structure in the universe.

"We explore these connections and find common phenomena," Campbell said of the team's experiments. "One day, this type of experiment, using cold-atom physics, could unlock the mysteries of the formation of the universe." [8 Baffling Astronomy Mysteries]

"Over the last decade or so, scientists have really figured out how to control ultracold atoms precisely," she added. "So, we held these atoms in these traps made of light, and, thanks to new technologies and developments in the lab, we're able to finely control these light potentials, which means we can do lots of different things with them."

The work brought together experts in atomic physics and gravity in what team members described ass a testament to the versatility of the BEC as a platform for testing ideas from other areas of physics.

"I was actually really surprised at how well our theoretical calculations matched what we saw in the lab and just how nicely it all worked out," Campbell said. "It's one of those things that turned out to be much better than expected."

This isn't the first time that researchers have used cold-atom physics to study cosmology. Previous experiments mimicked the behavior of black holes and provided an opportunity to search for evidence of the radiation that's predicted to pour forth from black holes' shadowy boundaries.

Wolfgang Ketterle of the Massachusetts Institute of Technology was one of the earliest pioneers of cold-atom physics; his work on the BEC won him the Nobel Prize in physics in 2001. He said that research like the kind reported in the recent study will inspire others to make an advance or a new prediction on the cosmological scale, driving science forward.

"There's clearly excitement," Ketterle, who was not involved in the study by Campbell and her colleagues, told Space.com. "It creates a new platform to observe aspects of inflation in an expanding Bose-Einstein condensate and how sound waves in a BEC can be used to study inflation dynamics."

Future experiments may study the complicated transfer of energy during expansion more closely or may even search for further cosmological analogies.

"The nice thing is that from these results, we now know how to design experiments in the future to target the different effects that we hope to see," Campbell said. "And as theorists come up with models, it does give us a test bed where we could actually study those models and see what happens."

The study, called "A Rapidly Expanding Bose-Einstein Condensate: An Expanding Universe in the Lab," was published in April in the journal Physical Review X.