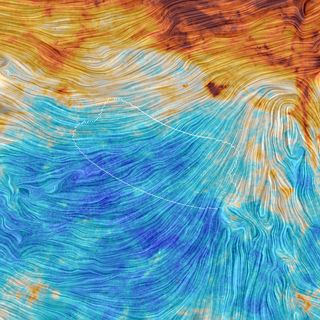 The search for evidence of the universe's ancient faster-than-light expansion is heating up, just after a much-ballyhooed recent detection was deemed a false alarm.

In March 2014, a team of scientists using the BICEP2 telescope at the South Pole announced that they had spotted an apparent signal of primordial gravitational waves in the cosmic microwave background (CMB), the light that began saturating the universe about 380,000 years after the Big Bang.

The announcement made a big splash, and for good reason. For starters, it suggested that gravitational waves — hypothesized ripples in the fabric of space-time — do indeed exist. But more important, the finding seemed to confirm the basics of cosmic inflation theory, which posits that the universe expanded dramatically in the first tiny fractions of a second after the Big Bang (and produced primordial gravitational waves in the process). [Cosmic Inflation and the Big Bang Explained (Infographic)]

Just last month, however, the purported discovery vanished in a cloud of dust: Data from BICEP2, the Keck Array (also at the South Pole) and Europe's Planck spacecraft showed that much of the supposed gravitational-wave signal — curly patterns in CMB polarization known as "B-modes" — was actually caused by interstellar dust.

This news is reshaping and refining, rather than scuttling, the hunt for primordial gravitational waves, as researchers figure out how best to hunt for CMB B-modes in a dustier-than-expected sky.

"We're in a very good place right now to make good progress on this question," said John Kovac, of the Harvard-Smithsonian Center for Astrophysics in Cambridge, Massachusetts, leader of the team that announced the discovery last March.

"We don't know what the answer is going to converge to, but we do know that progress is going to be very rapid," Kovac told Space.com. "It's going to be an exciting ride, and we can expect multiple rounds coming up in the next year or so."

The supposed B-mode detection was based primarily on BICEP2 measurements of CMB polarization in one small patch of sky at a single frequency (150 gigahertz). Models available at the time suggested that galactic dust emission, which can produce B-mode signals, in that part of the sky is quite low, discovery team members said.

But Planck's observations showed that those models — and the CMB B-mode search strategy — needed to be revised. Data from the spacecraft, which studied the cosmic microwave background in nine different frequencies from 2009 to 2013, revealed that foreground dust emission is relatively high over the entire sky.

"Now, people really understand that observing at more than one frequency is completely mandatory," said Brendan Crill, of NASA's Jet Propulsion Laboratory in Pasadena, California, a member of both the BICEP2 and Planck teams. (The two groups worked together to produce the new study, which has been submitted to the journal Physical Review Letters. BICEP, incidentally, is short for "Background Imaging of Cosmic Extragalactic Polarization.")

"You really have to field instruments that are able to look at CMB and also dust, and distinguish the two," Crill told Space.com. [The Search for Gravitational Waves (Gallery)]

And that's just what Kovac and his colleagues are now doing. For the past 13 months, they've been using the Keck Array to measure CMB polarization at a second frequency, 95 gigahertz. Dust emission is expected to be five times weaker at this new frequency, Kovac said.

"Any signal that is in common between 95 gigahertz and 150 gigahertz — those two frequencies — is likely to be mostly CMB B-modes," he said. "So, looking for that cross correlation is going to be a really powerful next analysis."

That analysis is already underway, and is pretty far along, Kovac added.

"We don't know the final answer yet, but hopefully, within just a couple of months — we certainly expect it this spring," he said. "So it's not going to take very long to make the next big jump in this question."

There's no guarantee that the "big jump" will be a detection of B-modes from inflation, Kovac stressed. Rather, the constraints will simply tighten, in one direction or another. And they should continue to tighten over time; two newly installed Keck receivers are now studying the CMB sky at 220 gigahertz as well.

"So we have three colors now that are operating at very high sensitivity," Kovac said. "We can expect ultrasensitive maps over the next year's worth of data to come out in three frequencies now, and that should continue to increase the confidence of whatever interpretation is favored by the data."

And Kovac and his group aren't alone in the B-mode hunt. Other teams — including those affiliated with the Spider balloon experiment, the South Pole Telescope and the ACT and POLARBEAR projects, which both study the sky using telescopes in Chile — are gathering supersensitive CMB data as well.

"The current generation [of instruments], I think, should be able to get a factor of five to 10 better constraints on the amplitude of [primordial] gravitational waves in the next three to five years," Crill said. "As to whether or not we'll see anything, that's really hard to say — the theoretical predictions are kind of all over the place."

Therefore, the failure of these ongoing searches to find B-modes in the CMB wouldn't necessarily be a knife through the heart of cosmic inflation theory; primordial gravitational waves may simply be very difficult to detect. (Their amplitude depends on the energy scale of inflation, which is unknown.)

If that's the case, a comprehensive ground-based survey, featuring sensitive new detectors and new telescopes at various spots around the world, may be required to confirm the existence of B-modes in the CMB, Kovac said. Such a survey could probably be performed for $100 million or less, he added.

Kovac and Crill would also love to see a new CMB-mapping space mission sometime down the road. (There have been three such missions to date: NASA's Cosmic Background Explorer and Wilkinson Microwave Anisotropy Probe, and Planck.)

"If evidence for inflationary gravitational waves starts to look quite firm, at whatever level the data prefers, the comprehensive mission that will map that signal out in detail probably should be from space, ultimately," Kovac said. "That'll get all the information."