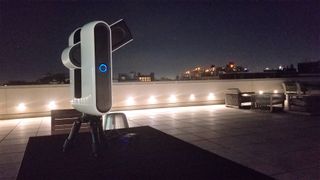 A swanky new telescope offers a whole new way to observe the cosmos. With automated controls and a smartphone app instead of an eyepiece, the Stellina smart telescope takes all the hassle out of skywatching — but it comes at a hefty price.

Stellina is a fully automated astrophotography telescope about the size of a backpack. You can quickly and easily set it up anywhere, even in places with copious amounts of light pollution, like New York City. I took Stellina out for a spin, first on my rooftop in Brooklyn, New York, and then in a darker area outside of the city. I was impressed with Stellina's ability to capture decent photos of deep-space objects despite the light pollution in Brooklyn. And thanks to the telescope's portable size and simple setup, the Stellina was easy to pick up and bring along for an adventure in the wilderness outside the city.

Using Stellina requires virtually no knowledge of astronomy or how to use a telescope. All you need is a smartphone and a little patience, and you can capture stunning images of galaxies, nebulas and star clusters. When you turn this telescope on, it automatically aligns itself by looking around the sky and identifying objects in the star field. Once the initialization is complete, you simply select an object from the catalog in the Stellina app on your phone; then, kick back and relax while Stellina does all the rest of the work for you. Astrophotography doesn't get any simpler than this. However, Stellina does have some limitations that may not be ideal for professional astrophotographers, and at a price of $3,999, it's a pretty big investment for the casual stargazer.

Related: Best Telescopes for the Money - 2019 Reviews and Guide

The telescope has a fixed focal length of 15.75 inches (400 millimeters), which makes it well-suited for observing objects outside of the solar system, but it doesn't work as well for observing planets. If you try to photograph a planet using Stellina, the resulting image will be quite small, though the resolution is good enough to make out the cloud bands of Jupiter.

To my surprise, I was able to get a pretty decent image of the Andromeda galaxy from my light-polluted home in Brooklyn. Although Andromeda looks more like an oblong smudge than a spiral galaxy in my image, you can still see some semblance of the galaxy's spiral arms. (For comparison, below is a video of the Andromeda galaxy as seen by the Hubble Space Telescope.) It took about half an hour of observation time for Stellina to get this image, which contains 158 stacked exposures. Because Stellina automatically moves along with the Earth's rotation, I didn't have to manually adjust the telescope's position to track Andromeda's motion across the night sky.

That same night, I also made an image of Caldwell 14, also known as the Double Cluster in Perseus, which contains the open star clusters NGC 869 and NGC 884. The Stellina app recommended a 10-minute exposure for Caldwell 14, but I cut the observation short when I noticed that one of the two clusters was partially outside the frame. Unfortunately, there is no way to manually "steer" the telescope to adjust the frame.

However, when I contacted Vaonis (the company that makes Stellina) about the issue, a spokesperson informed me that the app had been updated to correct this issue. In the future, Vaonis plans to issue another update that will enable users to capture mosaic images, which would allow for a wider field of view, the Vaonis spokesperson said.

After updating the Stellina app on my phone, I drove the telescope out to a darker area about 70 miles (110 kilometers) west of New York City to see what the instrument could do without the light pollution — and to take another stab at the image of Caldwell 14.

My second image of the double cluster, this time only a 5-minute exposure, looked a lot like the first one, but it was rotated by about 45 degrees to get the previously cropped cluster into the frame. I had to cut this observation short, too, because Stellina was having some difficulty with the temperature change and humidity and the app was displaying error messages. (You can compare both images in the slider above.)

Before Stellina gave in for the night, I was able to capture two other deep-space images, one of the Hercules star cluster and one of the Pleiades star cluster, also known as the Seven Sisters. Those images turned out pretty, but I ran into the same framing issues as I did with the double cluster when observing the Pleiades; only four of the seven bright stars for which the cluster is named are visible in my image. "This is due to the field of Stellina, but we will develop next year the possibility to do mosaics," the Vaonis spokesperson said.

When Stellina is working on an observation, it can take over an hour to complete the recommended observing time, depending on the object. As with most skywatching endeavors, astrophotography with Stellina requires a bit of patience. However, the Stellina app has some features to keep you occupied and entertained while you wait for your image.

As the telescope captures multiple short exposures, it stacks them all into one image, and you can watch the stacking happen in real time. You can also scroll through all the individual exposures and see how the final product improves with each newly stacked image. The built-in catalog, which contains more than 100 deep-space objects, is also filled with educational content and images to peruse while you wait.

When I connected to the Stellina Wi-Fi network on my Android phone, I was not able to simultaneously use my mobile data connection. I could be connected to only one network at a time. So, if you're trying to kill time while waiting for Stellina to complete an observation, you won't be able to do it by perusing the internet on your phone.

To learn more about Stellina, check out the telescope's specs and see more deep-space images, visit vaonis.com/stellina. You can order the telescope there for $3,999 (plus shipping), and it comes with a two-year warranty.