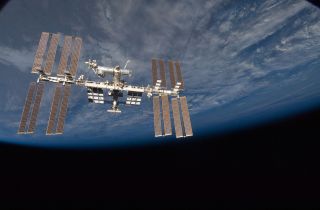 The International Space Station has been in orbit for two decades.
(Image: © NASA)

As part of its new plan to encourage commercial use of the International Space Station, NASA is opening the orbiting facility to up to two private astronauts per year, the agency announced today (June 7).

The decision represents a new direction for the space station, which has to date only hosted non-governmental astronauts via the space tourism company Space Adventures and the Russian space agency, which flew a half dozen non-astronauts for trips on the scale of a week. Under the newly announced NASA system, astronauts would be able to remain in space longer and take part in certain space station activities.

Of course, any private astronauts flying under this program will be governed by certain restrictions throughout the process. Before they fly, these visitors will need to meet NASA's own medical prerequisites for flight and complete the standard training process for space station astronauts.

And according to a directive NASA produced to outline in more detail its new suite of commercially oriented space station policies, private astronauts will not be allowed to use "high criticality hardware" once they've reached the space station.

Private companies would pay a daily rate for the space station access, Jeff DeWit, NASA's chief financial officer said during a news conference held today; he suggested that price could be around $35,000 per night.

The NASA materials do not specify when such flights would begin. However, because the program requires these visitors to travel on U.S. spacecraft, it's clear such flights won't launch right away. SpaceX and Boeing are each working on new human-rated vehicles, but neither program is ready to carry astronauts quite yet.

Russia has expressed interest in getting back into the space tourism business as well. Earlier this year, the country's space agency came to an agreement with Space Adventures to fly two tourists in 2021. That would be the first such flight launching from Russia since 2009, when the company's previous series of multimillion-dollar flights concluded.