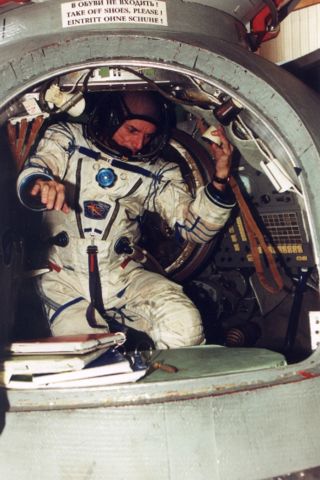 American businessman Dennis Tito, the world’s first orbital space tourist, is seen training for his historic 2001 flight to the International Space Station. Tito launched in April 2001 aboard a Russian Soyuz spacecraft thanks to a $20 million deal brokered by the Virginia-based firm Space Adventures.
(Image: © Space Adventures)

On that date, American businessman Dennis Tito became history's first space tourist, paying his own way to the International Space Station aboard a Russian Soyuz spacecraft. Forty years to the month after Yuri Gagarin became the first person in space, Tito showed that there was money to be made in human spaceflight -- potentially lots of money, as he plunked down a reported $20 million for his flight.

Now, 10 years later, the industry looks set to heat up, with multiple firms jockeying for position in a commercial space race that is arguably already under way.

"The private spaceflight industry did start with Dennis' flight," said Tom Shelley, president of Space Adventures, the Virginia-based company that brokered Tito's eight-day mission with Russia's Federal Space Agency and has sent a total of seven people on eight orbital flights since 2001. "That was the first real milestone and demonstrated to a lot of people that there was a market for private citizens to go to space." [Photos: The World's First Space Tourists]

Tito made his millions in the world of finance. But he was once an engineer at NASA's Jet Propulsion Laboratory, and has been a space enthusiast since he was a teenager.

"My dream was to fly in space before I die," Tito said. "And I basically came up with that lifelong goal around the time of Yuri Gagarin's flight."

In early 2000, Tito started working toward making his dream a reality. He would turn 60 later that year, and he felt like his chances of getting into space were rapidly running out. The oldest rookie spaceflyer at the time, after all, was NASA astronaut Deke Slayton, who first made it to orbit in 1975 at the age of 51.

In June 2000, Tito signed a deal with a company called MirCorp to ride a Soyuz to Russia's Mir space station. However, those plans fell through in December of that year, when Russia announced that it planned to deorbit the aging station. (Mir burned up in Earth's atmosphere in March 2001.)

Undeterred, Tito soon made other arrangements. He signed on with Space Adventures, which brokered an April 2001 flight to the International Space Station, again on a Soyuz. The station was a relatively new project at the time, having just begun assembly operations in November 1998.

The Russians agreed to take Tito's money and offer him a seat on a Soyuz. But the other station partners -- notably NASA and space agencies from Canada, Europe and Japan -- were not so thrilled. They informed Russia that they "recommended against" Tito's mission.

NASA officials said at the time that they didn't object in principle to the presence of a paying customer aboard the orbiting lab. They just didn't think Tito's training would be sufficient by April, which they said was a time of complex and crucial station operations.

"During this period, the presence of a nonprofessional crewmember who is untrained on all critical station systems, is unable to respond and assist in any contingency situation which may arise, and who would require constant supervision, would add a significant burden to the Expedition and detract from the overall safety of the International Space Station," reads a NASA press release from March 19, 2001.

Tito thinks his age may also have been a factor.

"If you're older, heart attacks happen, strokes happen, whatever," he said. "And what are they going to do, transport a corpse back to Earth? That would be very embarrassing for them, and traumatic."

So NASA did what it could to keep Tito from getting off the ground in April, according to Tito and Space Adventures officials.

"They put up everything that they could throw in the way to make it not happen," Shelley told SPACE.com.

Meanwhile, Tito carried on. He continued his training at the Star City complex outside Moscow, where cosmonauts have prepped for flight since Gagarin's day. Tito spent the better part of a year there, toiling in a sort of limbo.

"It wasn't easy," Tito said. "I had to hang out in Russia for eight months without really knowing whether I was going to fly or not."

Eventually, Tito's perseverance paid off. Over NASA's objections, he launched on April 28, 2001, becoming the 415th person ever to reach space. But Tito said all the drama and difficulties are water under the bridge, especially since the agency has been so supportive of the six other space tourists who have since flown to the orbiting lab -- and so supportive of private spaceflight in general over the past decade. [10 Years of Space Tourism]

"Their support is stronger than I would've ever dreamed or hoped for," Tito said. "So my bottom line is, I have nothing but good things to say about NASA."

Tito made it to orbit, spent about six days aboard the space station, and then landed in Kazakhstan on May 6, 2001.

His mission has had a lasting impact, inspiring a range of private spaceflight investment and activity, according to Shelley.

"I think [Virgin Galactic's] Richard Branson and [Blue Origin's] Jeff Bezos, and even Elon [Musk of SpaceX] -- they really wouldn't be in this industry if it wasn't for what Dennis originally did," Shelley said. Tito's flight, he added, demonstrated "that this was a feasible activity for private citizens to step up and pay the money."

For his part, Tito said he is happy to have been a part of the birth of this industry, though he shifts praise onto spaceflight entrepreneurs and the orbital tourists who came after him. And for him, of course, the trip will always resonate on a much more personal level.

"To me, it was a 40-year dream," Tito said. "The thing I have taken away from it is a sense of completeness for my life -- that everything else I would do in my life would be a bonus."