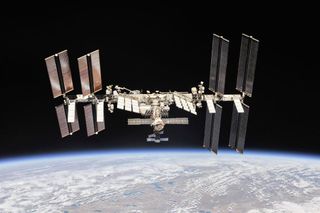 A photograph of the International Space Station in orbit around Earth.
(Image: © NASA/Roscosmos)

This weekend, SpaceX is launching its uncrewed test flight of the capsule that will — if all goes well — begin carrying astronauts to the International Space Station later this year, and scientists are already excited about the potential that development offers.

That's because once SpaceX and Boeing begin ferrying astronauts to the orbiting laboratory, the space station's standard crew will swell to seven people, one more than the current standard of six, according to NASA. (Right now, there are only three crewmembers on board, a lingering consequence of a launch failure in October that sent two astronauts abruptly back to Earth.)

"Statistics tell us that having one crew member up there, we can almost double the science and the research that's being done," Pat Forrester, head of NASA's Astronaut Office, said during a pre-launch briefing for the SpaceX launch. "Think about being at home ... how many times have you thought, 'If I just had one more set of hands, I could get ahead, I could get things done.'"

The standard space station crew is six people, although for a couple of brief stints nine astronauts have crammed into the orbiting laboratory. And those crewmembers can't dedicate all of their time to tending science experiments — they also have domestic chores to take care of to make sure their home remains safe to inhabit.

"Think about that crazy day when you're now able to have private researchers go up to help," Patrick O'Neill, senior marketing and communications manager with the Center for Advancement of Science in Space, which manages the International Space Station U.S. National Laboratory, said in a NASA statement. "That idea is coming closer and closer with every single day."

If all goes well with this weekend's uncrewed test flight, SpaceX will launch a second, crewed test flight in July. Boeing is following a similar schedule, eyeing flights in April and August. Successful test flights would allow NASA to start using these companies to launch full-term members of space station crews.