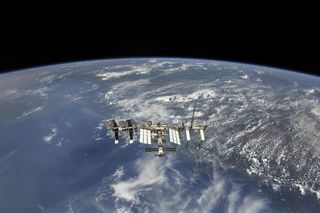 For two minutes, NASA astronaut Leroy Chiao could see nothing but blue-marbled Earth swirling above his head. "Surreal" is how he described the moment. Chiao was in the middle of a lengthy spacewalk to assemble part of the International Space Station, an orbiting laboratory the likes of which had never been seen before.

Today (Nov. 20) marks the 20th anniversary of the launch of the station's first component, made possible by the contribution of hundreds of engineers, space shuttle astronauts like Chiao, international support and the crews who continue launching up to this day. It has been continuously occupied since Nov. 2, 2000.

As we reflect on what the space station has afforded humanity — diplomacy, progress in human spaceflight and discoveries in the life sciences — we also have to wonder what the space lab's future holds. [Astronauts' Amazing Space Station Views For 20th Anniversary (Gallery)]

The International Space Station, or ISS, pushed NASA into "an entirely new way of thinking," Gary Oleson, a station engineer, told Space.com. Oleson worked as a member of NASA's Space Station Program Office from 1988 to 1993; at first doing the cost side of systems engineering, and then as a principal systems engineer liaison, where he focused on the project's logistics and maintenance.

That's just one reason why the team was thrilled that space station construction went so smoothly. "We were kind of surprised when we didn't have bigger technical hiccups during the assembly phase," Chiao told Space.com. "The pieces actually all fit together. Pieces that were built in other countries and using different electric systems… and a lot of these pieces weren't even fit-checked." [International Space Station at 20: A Photo Tour]

The ISS includes contributions from 15 nations. The space lab's major partners include NASA, Russian space agency Roscosmos and the European Space Agency; the Japan Aerospace Exploration Agency and the Canadian Space Agency are also partners. Since the space station opened, the ISS has hosted 232 individuals from 18 countries.

The space lab flies at an average altitude of 248 miles (400 kilometers) above Earth's surface. It circles the planet every 90 minutes at a speed of about 17,500 mph (28,000 km/h). To put that in perspective, the distance the ISS travels daily is roughly how far it would take to go from Earth to the moon and back.

Current plans call for space station operations to continue through 2024. The Trump administration has proposed to no longer directly support the space station after 2025.

"[NASA] intends to be a major customer for whoever operates the station, but it would like to get into the role of being the primary payer for the operation of the station," John Logsdon, Professor Emeritus at the Space Policy Institute in George Washington University, told Space.com. "I think the crucial issue is how long the government pays for the operation of the station and is there some sort of private operator to step in and take over the station. [The International Space Station: Inside and Out (Infographic)]

(Technologically, of course, the space station must end someday — and when the project began it was designed to last only 15 years. But current evaluations suggest that most of what's up there now should be perfectly safe through 2028, if not beyond.)

The argument to end the station's public-service career early is that saving on the costs of the space station means funding more human space exploration like a return to the Moon and an extension to Mars.

"I think the lunar base makes sense for a lot of reasons," Chiao said. "You want to be able to go, reestablish your environment and make sure it's going to work before you send it off to Mars." But, he added, "saving in one area doesn't mean funds are going to be available for the program you want… that's not necessarily true."

While the future of the space station remains uncertain, the perspective it affords to anyone looking at images taken from its cupula is most definitely awe-inspiring.

"The fact that we do have a vehicle in space — the ISS — and the fact that we do launch regularly to it, serves as an inspiration to young people," Chiao added. Stories like his breathtaking two minutes gazing at the continents and clouds moving across the blue planet are certainly enough to mesmerize anyone.