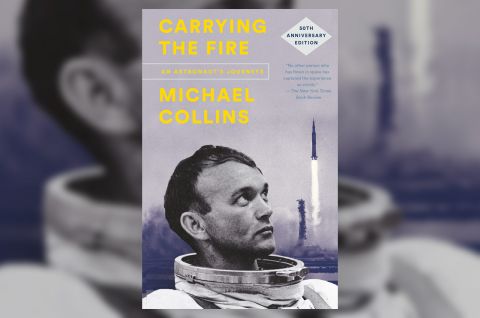 Four years after he orbited the moon alone during humanity's first lunar landing mission, Michael Collins brought everyone back on Earth along for the ride.

In his 1973 book, "Carrying the Fire: An Astronaut's Journeys," Collins set out to share what it was like "up there." And by all accounts, he succeeded. "Carrying the Fire" is wildely considered one of, if not the best of the astronaut-authored memoirs.

In his original preface, Collins observed that the few years that had passed since the Apollo 11 mission had given him some perspective about how flying in space had changed his life. Now, five decades after his journey with Neil Armstrong and Buzz Aldrin, Collins has revisited "Carrying the Fire," penning a new foreword for a 50th anniversary edition of the book.

When he chose the title for the book, "Carrying the Fire" was a reference to the care taken when carrying out a successful space mission. ("How would you carry fire? Carefully.") Fifty years later, the phrase has taken on a second meaning, provided what he wrote continues to resonate with new and old readers alike.

Collins has traded his role of carrying the technical fire of spaceflight to carrying the emotions and inspiration that it evokes.

collectSPACE.com recently caught up with Collins to talk about "carrying the fire" 50 years later.

collectSPACE (cS): In your 1973 preface you wrote about how the years that had passed since Apollo 11 allowed you to gain some perspective on how flying in space changed your life. You also wrote that the time allowed you to gain some insight into what non-astronauts find interesting. So with the benefit of now 50 years, were you to sit down to write "Carrying the Fire" today, how would what you wrote then have changed now?

Michael Collins: You know, I haven't read "Carrying the Fire" in a long, long time, so I have a suspicion that if I went back through it, I would find things that either were wrong or I'd no longer quite agree with. But I think by and large, it's endured fairly well from what I have gathered and what other people have said.

I'm proud of "Carrying the Fire" in that at the time that I wrote it and for a long time after, it was the only astronaut's book that had not been ghostwritten. And I like that. That is an enduring quality that it has, for better or for worse. But I like the fact that, for a while at least, it was unique in that everybody else was turning to some professional writer, which ends up with a better product in a way, but not quite as personal a product in some other ways. So I'm fundamentally okay with "Carrying the Fire" as it was written.

cS: ...but beyond that characteristic, what has transpired over the past decade that inspired you to expand on some of the same topics, for instance about Mars being a destination for human exploration?

Collins: I always used to joke that they sent me to the wrong place. The moon is far less interesting than Mars, NASA should've been renamed the National Aeronautics and Mars Administration and, and so on. And you know, as time goes by, I think I helped — I'm not sure whether Flash Gordon ever went to Mars, I think he prowled around in the caverns of Mongo, and I was with him then.

In the back of my mind, I've always thought we should do something about this impetus human beings have to look up into the night sky with wonder and then to wonder if they couldn't maybe set foot up there somewhere. And of course the moon is just right there. You have to look at it whether you want to pay attention to it or not. But Mars, to me, has always been more fascinating.

As we get closer to having a capability to reach Mars, then it sort of takes over. When I think of space, the two words that come to mind are outward bound. I think humanity has this innate curiosity. It wants to go outward bound. Mars is there, Mars is getting closer, Mars is becoming a more practical destination, so Mars has taken over my thinking and my writing.

cS: On that subject of going to Mars, one subject that you touch on in both your new and original prefaces is the idea of luck, and how luck landed you in the right place and right time to be on that first moon landing mission. If you could control that luck and some of that timing, would you trade being on the first moon landing crew for being on the first Mars crew?

If it were a one-way deal, ooh, I may change my mind on that, but if I could be on the first crew to go to Mars and then return safely to Earth, yeah sure, I'd swap anything for that.

cS: Are you surprised that "Carrying the Fire" has had the lasting effect it has had, in terms of crossing over generations and remaining what many consider the best written astronaut book out there?

Collins: I think books, in general, are little gems. They hide away on the shelves in libraries for a decade but then some young kid will pluck one out by mistake perhaps and dig into it and find something in there that he or she didn't know. So I'm a big fan of books.

cS: The audience that will read the 50th anniversary edition — other than those who have already picked up previous editions and are picking up this latest version to celebrate the anniversary — is going to be, statistically, people who were not alive for Apollo 11. How do you think your story will resonate differently from the original audience you wrote it for, who were people who had lived through both your Gemini 10 and Apollo 11 missions and watched them unfold from the Earth? Now it will be read by an audience that only knows your missions and that era of spaceflight from history.

So I guess what I'm trying to say is that even though people were alive and reading the newspaper and watching TV in 1969, I was writing to them with what fundamentally was a strange, alien kind of thing — a voyage away from everything that they knew about. I was a stranger writing about strange stuff. So even though they might have read about it in the newspaper, they didn't have a feeling for it.

And that strangeness has permeated and intensified today with a generation who has every right not to know anything about it because they weren't born yet. But it's just a gradual change and not a dramatic shift in the audience. The people who I was writing for back in 1973 are pretty much like the same people today. Some are interested in space, some are not, and some know a bit about it, but most don't.

The 50th anniversary edition of Michael Collins' "Carrying the Fire: An Astronaut's Journeys" was released on April 16, 2019 by Farrar, Straus and Giroux.