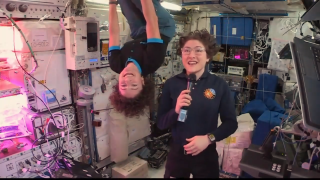 NASA astronauts Jessica Meir and Christina Koch demonstrate how their hair stands up in the microgravity environment on board the space station, whether they're "upside down" or not.
(Image: © NASA/YouTube)

Koch and Meir, who are currently stationed aboard the International Space Station, answered a cosmic call today from Tyson, who wanted to clear a few things up. In discussing space-grown food, as Meir and Koch are working on a plant growth experiment in which they've grown and harvested mizuna mustard greens, Koch mentioned that the next big step in growing space food will be growing protein sources like legumes or peanuts. This led Tyson to ask if the "the future of space exploration would be vegetarian?"

"Maybe. We're not sure," Meir responded, adding that, with space-based experiments that are currently underway, researchers are improving our ability to "grow" animal proteins without any animals present (just some cells to start with), so it's possible that lab-grown meat will become a more viable food option.

With the question of vegetarian astronauts put to rest, Tyson also talked about hair in space. In the movie "Gravity," he said, "Sandra Bullock's bangs always pointed down. … I want to tell everyone, "Look at your hair in space in zero G.' The hair does not know which way down is."

To illustrate this point, Meir flipped upside down from her starting position, her hair remaining in place, pointing straight "up" and away from her scalp, the whole time. "I think our special effects are a little better up here," Koch joked.

You can see Tyson's full 20-minute interview below.

With Meir flipping back around, Tyson then brought up motion sickness in space and how it's likely that, traveling to and living in space, astronauts get queasy at some point. "I'm certain at least one of you have thrown up in the space of the space station before," he said. "How do you clean that up if it's just scattering everywhere?"

"Neither of us have had the opportunity to experience that [throwing up in space]," Meir said. "We do, of course, prepare for it … we have special motion sickness bags that we fly with us in the spacecraft." She added that in earlier training, when she flew on parabolic flights (airplane flights, commonly referred to as flights on the "vomit comet," which allow passengers to experience weightlessness), there were "some people that tried to utilize the bags and missed."

Koch and Meir also told Tyson that astronauts on the space station like to share food, especially because there are people from different space agencies flying with different cultural cuisines. "My goal was actually to fly with a Japanese astronaut, because I love Japanese food," Meir said.

The conversation also included politics and what can be learned from really seeing our Earth and experiencing what's called the overview effect, a phenomenon in which astronauts report a changed perspective on life after seeing Earth from space. "Maybe some of our world leaders need to come up here and experience that overview effect for themselves," Meir said in a half-joking manner.

On Oct. 18, Meir and Koch completed the first all-woman spacewalk, after Meir arrived at the space station on Sept. 25. Additionally, Koch is on track to beat the record for the longest spaceflight ever completed by a woman, with her mission scheduled to end after 335 days, extended to February 2020.

Tyson, who serves as the curator of the Hayden Planetarium at the American Museum of Natural History, hosts National Geographic's television series "StarTalk" along with "StarTalk Radio." He is also the host of Fox's "Cosmos: Possible Worlds," which will premiere on the National Geographic channel in March 2020. The show was originally supposed to air in March of this year but was put on hiatus as Fox and National Geographic investigated sexual harassment claims against the astrophysicist. With the investigation complete, the show will officially make its return.