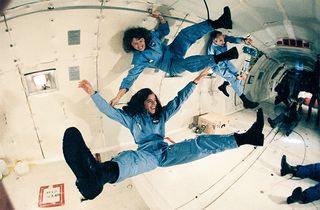 For future astronauts, riding on the "Vomit Comet" is an essential part of training to live in the microgravity of space.

In 1957, astronauts began training on planes that simulate weightlessness by making roller-coaster-like maneuvers in the air. The simulation makes some passengers nauseous, which inspired the nickname "Vomit Comet." In 1973, NASA took over the Air Force program that preceded the space agency's formation. However, since 2008, a private company ,Zero-G Corp., has handled the training. And although the program was designed for astronaut training, it's not reserved for future space flyers; scientists, engineers, students and celebrities have all taken a spin on the Vomit Comet to experience the feeling of weightlessness.

Changing with the times

But the origins of the Vomit Comet predate NASA. In 1950, the United States recruited two German scientists after World War II: aeronautical engineer Fritz Haber and physicist Heinz Haber. The two brothers proposed simulating the microgravity of space in airplanes that would make parabolic flights in a wave-like configuration. In 1957, the Air Force began what would become NASA's Reduced Gravity Program, training astronauts in the Mercury and Apollo programs in this way.

The airplane also made a Hollywood appearance: It was used to film weightless scenes in the movie "Apollo 13." According to an article on Space.com's sister site Live Science, set designers created a spacecraft interior adapted to the inside of the airplane. Then, the cameras captured short, seconds-long snippets on film. Director Ron Howard leased the aircraft for six months to achieve the shots of weightlessness that viewers see in the film.

KC-135A is now on display at Ellington Field in Texas. Then-lead test director John Yaniec said KC-135A was still going strong when it was retired in 2004, but its unique role made it "increasingly difficult and expensive to maintain."

In 2005, NASA replaced the KC-135 aircraft with a Navy C-9, which the agency flew until it canceled the Reduced Gravity Program in 2014. In 2016, the C-9 was used to test spacesuits for the Orion spacecraft, for the space agency's next phase of exploration. Since 2008, NASA also has had a microgravity service contract with Zero Gravity Corp. (Zero-G) and has used its aircraft, a modified Boeing 727, for training flights.

Virginia-based Zero-G started flying its plane, G-Force One, in 2005, selling tickets for $4,950 a pop. Celebrities such as director James Cameron, "Star Trek" actor George Takei and Virgin Galactic's billionaire founder, Sir Richard Branson, have all taken flights on Zero-G planes. In 2007, renowned physicist Stephen Hawking flew on G-Force One, prompting Alan Stern, associate administrator for NASA's Science Mission Directorate at the time, to say, "It's the 21st century now, and I expect more and more scientists to be conducting research in zero gravity, and even in space, as new vehicles and venues for such research open."

According to NASA, the airplane flies in a wave pattern of steep climbs and sharp dives. As it climbs up the parabola, or the "hump," passengers achieve several seconds of weightlessness at the top. The plane then dives back toward the ground, pulling up to create the bottom of the wave. Passengers experience nearly twice the tug of Earth's gravity from about the midpoint on the way down, across the bottom and halfway back up.

In a 1999 interview, Yaniec told Space.com that a large percentage of his passengers wind up ill. "I don't really keep any stats," he said. "But it amounts to a rule of thirds — one-third violently ill, the next third moderately ill and the final third not at all."

Dan Durda, a researcher with the Southwest Research Institute who has flown on microgravity flights for research, told Space.com that weightlessness is "an amazing, out-of-this-world experience."

"That feeling is the most magical, amazing feeling there is absolutely no analogue for," he said. "It's addicting."