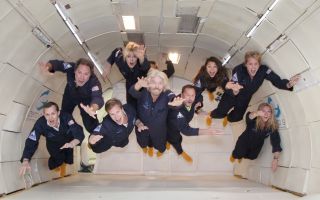 Sir Richard Branson's first spaceflight is fast approaching, and the Virgin Galactic founder is making sure his body is ready for the ride.

Branson has said he and his family will be aboard Virgin Galactic's SpaceShipTwo when the vehicle makes its first commercial suborbital spaceflight later this year. So Branson and a number of other Virgin Galactic customers took to the skies recently for a training flight aboard a so-called "vomit comet" — a jet airplane modified to offer brief periods of weightlessness via parabolic maneuvers.

"We took around 80 other future astronauts along to do their training, and everybody had a wonderful time," Branson wrote in a blog post today (Feb. 5) about the flight, which was arranged by the U.S.-based Zero Gravity Corporation. "It has certainly whetted our appetite to experience space for real." [Rise of SpaceShipTwo: Virgin Galactic's Test Flights Photos]

"The most incredible thing about the Zero-G flight is lying flat on the ground in the plane, slowly finding your body lifting and then levitating all the way up until you hit the top of the plane. You literally had to peel us off the ceiling!" he wrote. "As you get more confident, you can do loops, float around and have the kind of fun that causes the priceless looks on our faces in the photos!"

The vomit comet completed 15 parabolas, giving Branson and his fellow trainees a number of chances to float freely, albeit briefly, throughout the plane. SpaceShipTwo will fly just one parabola, but it will be much longer and higher, allowing a more sustained microgravity experience, Sir Richard Branson said.

The six-passenger SpaceShipTwo is designed to be carried to an altitude of about 50,000 feet (15,000 meters) by a huge airplane called WhiteKnightTwo. At that point, the spaceliner is dropped, and its onboard rocket engine kicks on, accelerating the craft up to suborbital space.

A ticket to ride the space plane currently costs $250,000. To date, more than 600 people have put deposits down to reserve a seat.

Virgin Galactic isn't the only company that plans to fly customers to suborbital space. XCOR Aerospace, for example, has developed a one-passenger rocket plane called Lynx, which may also begin commercial operations later this year. Tickets to ride Lynx are currently selling for $95,000.