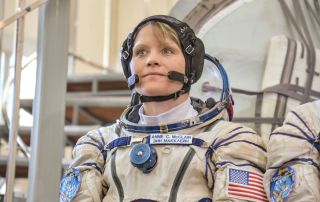 Update for Aug. 24: Astronaut Anne McClain has issued a statement refuting the claims of her estrange spouse. Read the full story here.

The closely guarded private life of a NASA astronaut burst into spotlight in a New York Times report Friday (Aug. 23) on a messy divorce battle involving American astronaut Anne McClain that has apparently led to claims of identity theft against the spaceflyer.

The incident is rooted in a bitter separation with McClain's spouse, Summer Worden, the Times report continued. According to Worden, her bank account was accessed without her permission from a NASA-affiliated computer network, prompting her to file a complaint with the Federal Trade Commission. A family member also filed a complaint with NASA's internal Office of Inspector General.

Before the separation, McClain had been helping to raise Worden's young son from a previous relationship. That role included providing financial support, the New York Times report stated, and her lawyer said that she accessed the bank account for that purpose and without knowing Worden had requested she no longer do so.

McClain and Worden had struggled over the child before, the New York Times report continued. McClain wanted to adopt him after the couple's wedding in 2014, but Worden refused; before the marriage dissolved, McClain requested parenting rights from a judge. McClain shared official astronaut portraits that featured the child, taken in 2017, but removed them from the internet after Worden complained.

According to the New York Times, McClain accused Worden of assault, which met with denial and a divorce from Worden; the case was dismissed. The divorce continues, but according to McClain's statement to NASA's internal investigation, the couple's finances are not yet separated, leading to  the bank account confusion.

McClain provided comments to the Times only through her lawyer, Rusty Hardin; NASA declined to comment to the Times about the incident.

On Saturday (Aug. 24), NASA officials said: "Lt Col. Anne McClain has an accomplished military career, flew combat missions in Iraq and is one of NASA's top astronauts. She did a great job on her most recent NASA mission aboard the International Space Station. Like with all NASA employees, NASA does not comment on personal or personnel matters."

The Times added that these events unfurled around the much-touted March 29 spacewalk that McClain was to conduct with NASA colleague Christina Koch, which would have been the first all-female spacewalk in history.

That spacewalk was reassigned, with NASA astronaut Nick Hague replacing McClain. NASA said at the time that the decision was McClain's choice, spurred by realizing during her first spacewalk that a medium spacesuit torso fit her best. Koch was already scheduled to wear the only prepared medium torso on the station.

McClain was not publicly out in official NASA communications, although some gay media outlets have followed her career and identified her as lesbian. She is now — albeit involuntarily — the first publicly out astronaut. (Sally Ride, who became the first American woman in space in 1983, was lesbian, but that fact was not revealed until after her death, by her spouse.)