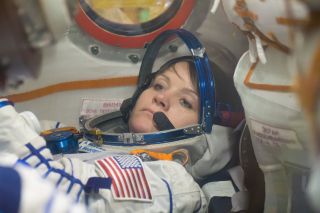 NASA astronaut Anne McClain on Saturday (Aug. 24) refuted claims that she inappropriately accessed the bank account of her estranged spouse after details of their divorce were made public in the New York Times this week.

While in the middle of their separation process, McClain's spouse Summer Worden has claimed that McClain accessed her bank account from a NASA-affiliated computer network, according to a report from the New York Times on Friday (Aug. 23). Worden has accused McClain of identity theft and claimed the astronaut accessed the account from aboard the International Space Station during a recent space mission, and that the agency's Office of the Inspector General is looking into the matter.

Today, McClain said in a Twitter statement that there's "unequivocally no truth to these claims."

"We've been going through a painful, personal separation that's now unfortunately in the media," McClain continued. "I appreciate the outpouring of support and will reserve comment until after the investigation. I have total confidence in the IG [Inspector General] process."

There’s unequivocally no truth to these claims. We’ve been going through a painful, personal separation that’s now unfortunately in the media. I appreciate the outpouring of support and will reserve comment until after the investigation. I have total confidence in the IG process.August 24, 2019

The matter is currently being investigated and, according to this tweet by McClain, she will not be speaking about the claims any more until the investigation concludes and is resolved.

"Lt Col. Anne McClain has an accomplished military career, flew combat missions in Iraq and is one of NASA's top astronauts. She did a great job on her most recent NASA mission aboard the International Space Station. Like with all NASA employees, NASA does not comment on personal or personnel matters," NASA officials said in a statement to Space.com.

According to the New York Times report, an attorney representing McClain has stated that she accessed the account to provide financial support for Worden's 6-year-old son. The attorney stated that she had historically provided financial support for Worden's son and accessed the account before with the same password, without any direction from Worden to stop doing so.

McClain is a lieutenant colonel in the U.S. Army and veteran of one long-duration spaceflight to the International Space Station. She joined NASA's astronaut corps in 2013.

McClain has spent 204 days in space during her space station mission. She launched to the orbiting lab on a Soyuz spacecraft in December 2018 as part of the Expedition 58/59 crew and returned to Earth in June of this year. She performed two spacewalks as part of that mission.

In March, McClain was tapped to join crewmate Christina Koch on the first all-female spacewalk at the space station, but that plan was called off due to a lack of appropriately-sized spacesuits for the two women.