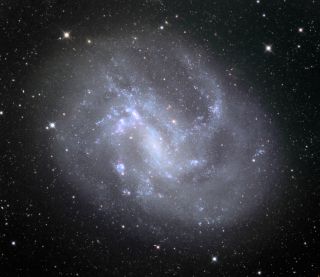 When people think of a black hole, they typically picture a large, burning cosmic being that's a million or billion times larger than our sun. However, not all black holes are supermassive, and the smaller ones matter too.

A team of scientists from the University of Michigan measured the mass of a small black hole in a nearby dwarf galaxy, estimating the black hole to be around 40 times smaller than researchers had previously thought.

The object, located at the center of the dwarf galaxy NGC 4395, is around 10,000 times the mass of the sun, the researchers determined.

Although astronomers believe that every galaxy the size of or larger than the Milky Way harbors a supermassive black hole at its center, researchers don't know a lot about the black holes of smaller galaxies — or whether black holes even exist in all galaxies.

"Do these galaxies have black holes, and if they do, do they scale the same way as supermassive black holes?" Elena Gallo, an astronomy professor at the University of Michigan and lead author of the study, said in a statement.

By looking at these relatively small black holes, the scientists hope to get a better understanding of the supermassive black holes that occupy larger galaxies, the researchers said. They also want to determine how black holes affect these galaxies' properties.

"Answering these questions might help us understand the very mechanism through which these monster black holes were assembled when the universe was in its infancy," Gallo added.

In order to measure the mass of the black hole, the researchers used a technique referred to as reverberation mapping, which measures the radiation thrown off by a rotating disk around a black hole.

The scientists aim to be able to apply the same measuring techniques to supermassive black holes, the statement said.

"This adds a new member to the family of black holes we have information about," Gallo said.

The findings were published June 10 in the journal Nature Astronomy.