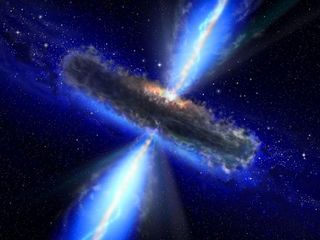 Obese black-hole galaxies could be a stepping stone to the quasars we see today.
(Image: © NASA/ESA)

Gluttonous black holes in the center of some galaxies could be precursors to the brightest objects in the known universe.

A recently proposed type of galaxy with an overwhelmingly large black hole in its center could give astronomers a better understanding of the formation of quasars — bright objects in galaxies with supermassive black holes. The centers of these obese black-hole galaxies (OBGs) could harbor black holes so massive that radiation from where the black hole accretes would overwhelm that of the stars within its galaxy.

New research indicates that some of the most luminous quasars seen from Earth were likely OBGs first before something "lit up" the black hole and had it pump out energy visible from Earth. [Images: Black Holes of the Universe]

The simulations indicate there could be a million OBGs in the observable universe, making the team behind the work ask, why don't we see them?

The team, led by scientists from the Max Planck Institute for Extraterrestrial Physics in Germany, was trying to figure out why astronomers can see quasars from a very far away, at the beginning of the universe. (More distant objects are older and have less metal in them.)

"People have hypothesized there could be these black holes forming from this metal-free gas reservoir ... which is completely free of stars," said Bhaskar Agarwal, a doctoral research fellow at Max Planck who led the research.

This means the black holes in OBGs could have formed separately from the stars surrounding them, contradicting recent observations by the Herschel Space Observatory. In that earlier finding, astronomers suggested that galaxies that have black holes in their center — including the Milky Way — see the stars and black holes evolve together.

Other research, including observational research, also shows OBG-like objects with a very massive black hole at the center of the galaxy, Agarwal told SPACE.com.

But if the black holes in OBGs formed solo from a reservoir of gas, the stars must have come from somewhere. The simulations suggested the black hole would have remained on its own until a merger between galaxies brought stars within its vicinity.

The astronomers' simulations showed there could be a million of those OBGs within the observable universe. Many of them, however, would be invisible with conventional searches; most black holes are seen through the X-rays they produce when they gobble up matter. If there were no matter to feed on, the black hole would remain silent.

OBGs also could have an environment where stars evolved slower than usual. OBGs form in the presence of radiation from a nearby galaxy — sometimes, the one that merges to bring stars near the black hole, or sometimes, a nearby galaxy.

That same radiation also delays star formation in other metal-free galaxies. How this affects OBG evolution is not exactly known, however. The team is working on a more advanced simulation that takes into account the metallicity of stars within an OBG.

"The only thing we did not treat in this model was propagation of metals in a galaxy to black-hole collapse in the first place," Agarwal said.

If an OBG's black hole is active, the spectral energy distribution could be visible with instruments aboard the James Webb Space Telescope that can peer into the near- and mid-infrared spectra of light — with a resolution able to see to the edge of the universe.

Observations, though, would have to wait until at least 2018, when James Webb is supposed to make it into orbit.

The results were published in the Monthly Notices of the Royal Astronomical Society by Oxford University Press on May 29. Participating researchers came from Max Planck, Yale University and the University of Edinburgh.