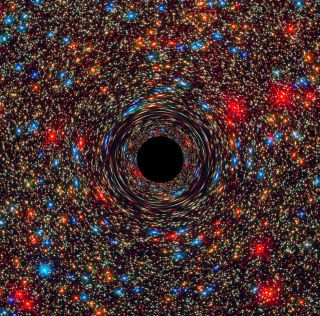 A computer-simulation view of a supermassive black hole at the heart of a galaxy. The edge of the black central region represents the event horizon, beyond which no light can escape.
(Image: © NASA, ESA, and D. Coe, J. Anderson, and R. van der Marel (STScI))

We may be about to get an epic and unprecedented look at a black hole.

The Event Horizon Telescope (EHT) project, an international effort that aims to capture the first-ever image of a black hole, will announce a "groundbreaking result" at a news conference next week, team members said Monday (April 1).

The briefing, which will be hosted jointly by the EHT project and the U.S. National Science Foundation (NSF), takes place next Wednesday (April 10) at 9 a.m. EDT (1300 GMT) at The National Press Club in Washington, D.C. (NSF helps fund the EHT.) And you can watch the big news unfold: The event will be streamed live.

NSF Director France Córdova will speak at the news conference, as will the following panelists, according to an NSF media advisory:

The advisory doesn't state what the April 10 announcement will be, but the above information suggests it's a pretty big deal.

If you want to try to connect some dots, here's some basic information about the EHT. The project links up radio dishes around the globe, creating a virtual telescope about the size of Earth. The goal is to generate enough magnifying power to image the area around a black hole, especially its event horizon — the point beyond which nothing, not even light, can escape. (Directly imaging the black hole itself — the part inside the event horizon — from our perspective is, of course, impossible; there are no photons from that exotic realm to catch.)

"This capability would open a new window on the study of general relativity in the strong field regime, accretion and outflow processes at the edge of a black hole, the existence of event horizons, and fundamental black-hole physics," the EHT team wrote in a project description.

"Over the coming years, the international EHT team will mount observing campaigns of increasing resolving power and sensitivity, aiming to bring black holes into focus," the team added.

The EHT project focuses on the two supermassive black holes that have the largest apparent event horizons, as seen from Earth: the one at the heart of our own Milky Way galaxy, known as Sagittarius A*, and the monster that anchors the giant elliptical galaxy M87.