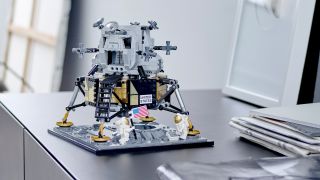 Space fans around the world are celebrating the 50th anniversary of the Apollo 11 moon landing this month. NASA astronauts Neil Armstrong and Buzz Aldrin became the first people to set foot on the moon on July 20, 1969, four days after they launched on their historic mission.

To help you celebrate the Apollo anniversary, Space.com has rounded up some of the coolest Apollo toys, gifts and accessories for "lunatics" looking for lunar landing memorabilia. Be sure to also check out our Apollo 11 books guide and our list of Apollo anniversary events.

This 1,900-piece Lego set comes with everything you need to recreate a lunar landing: the Saturn V rocket, lunar lander and command/service module. It also includes stands so you can display your creation! See photos of the set here.

This messenger bag features a replica of the moon maps that NASA's Apollo astronauts used. Landing sites for all the Apollo missions as well as the lunar features are labeled on the maps. The bag is big enough to hold a 13-inch laptop.

Metal Earth, a company known for its tiny, shiny model kits, is offering a special combo of Apollo sets for the 50th anniversary. You can get the lunar and command modules as well as the Saturn V rocket for $25 on Amazon.
View Deal

This collectible ceramic mug is modeled after the Apollo 11 command module, "Columbia." It features an astronaut in an Apollo spacesuit looking out the window.
View Deal

Even the U.S. Mint is getting in the Apollo spirit — the entity in charge of producing the nation's currency has created a special line of Apollo 11 50th anniversary coins. This silver dollar is $85 on Amazon, but there are six other types of Apollo anniversary coins in the collection ranging in price from $30 to $460. You can explore the entire collection here.
View Deal

These limited edition Oreo Marshmallow Moon cookies have special moon-themed designs, and the packaging glows in the dark! This 10.7-ounce package is $8 on Amazon, but you can also find it in stores. Read more about the cookies here.
View Deal