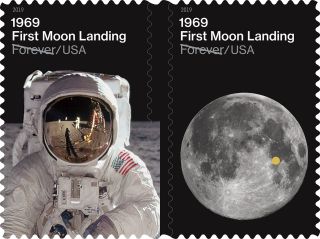 The U.S. Postal Service (USPS) will issue some very special stamps to celebrate the first moon landing 50 years ago.

On July 19, 2019 — the day before that historic anniversary — USPS will issue two new "forever stamps" to honor the Apollo 11 landing, which saw astronauts Neil Armstrong and Buzz Aldrin descend safely to the surface.

Forever stamps are a USPS concept created in 2007. The service calls them "non-denominational" postage for first-class service, meaning that if the first-class postal rate increases after the customer purchases the stamps, the buyer can still use the same stamps.

Each of the two new stamp designs shows an image representing the Apollo 11 landing. The first is based on Armstrong's iconic photograph of Aldrin — and his own reflection — during one of their moon walks. The other shows a photograph of the moon, with the Apollo 11 landing site marked with a yellow dot. Both stamps were designed by Antonio Alcalá, the art director for USPS.

When Apollo 11 launched, USPS had arranged for a stamped envelope to fly with the astronauts, so that they could postmark it on the moon. But Aldrin and Armstrong forgot to do so until after they headed back home, according to a 2013 Space.com article.

USPS finally got its "moon mail" during Apollo 15 in August 1971, when commander David Scott postmarked an envelope during his third and last excursion on the lunar rover. USPS, from a distance of 238,000 miles (383,000 kilometers) away from Scott, issued the same stamps on Earth.

This "moon mail" was different from another set of stamps the Apollo 15 crew postmarked without NASA's knowledge. When a dealer began to sell the envelopes, the agency changed its rules about what astronauts could take with them during spaceflights, according to collectSPACE.