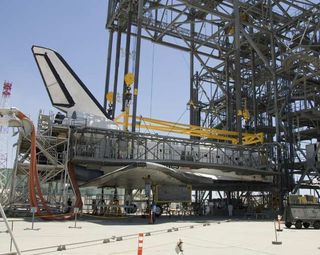 Space shuttle Atlantis is shown during jacking and leveling operations while suspended from a sling in the Mate-Demate Device at NASA's Dryden Flight Research Center.
(Image: © NASA/Tony Landis)

The spaceshuttle Atlantis may begin a cross-country trek atop a tricked out jumbo jet asearly as Sunday to fly from a California landing site to its Florida home,weather permitting, NASA officials said.

Atlantiswill ride piggyback atop a modified Boeing 747 jumbo jet during the plannedferry flight, a $1.8 million trip aimed at returning the shuttle home fromCalifornia?s Edwards Air Force Base in Southern California. The shuttle landedon backup desert runway there last Sunday to end a 13-day mission that overhauled theHubbleSpace Telescope for the last time.

TracyYoung, a spokesperson for NASA?s Florida spaceport, said weather in Californiaand across the country may also play a role in Atlantis? trip home.

NASAcurrently plans to try and begin ferrying Atlantis home at about 9:00 a.m. EDT(1300 GMT) Sunday, which will be before local sunrise in California. High windsat Edwards have delayed some ground processing work, but the agency is stillhopefully to make that departure target. NASA?s Dryden Flight Research Centerat Edwards is overseeing the work.

?It?sdepending on weather, just like during a shuttle launch,? Young told SPACE.comfrom the California landing site.

While localconditions are expected to be favorable for a Sunday takeoff, NASA is on thelookout for harsh weather ahead of the shuttle-carrying mother ships, known asShuttle Carrier Aircraft, as they hop across the country from military air baseto air base. The heavily laden aircraft can sometimes fly as low as 10,000 feet(3,048 meters) in order to seek out favorable weather, NASA officials havesaid.

NASAtypically does not fly the modified 747 jumbo jet carrier vehicle throughturbulence or rain during ferry flights to avoid damage to the 100-ton spaceshuttle strapped to its back. A weather spotter plane will fly about 100 miles(160 km) ahead of the shuttle-carrier combo to make sure conditions are righten route to the next pit stop, Young said.

Shuttlemission managers prefer to land orbiters in Florida because it saves about aweek of transport time and the associated $1.8 million cost of the process. Theagency tried three times to land Atlantis in Florida last week, butthunderstorms repeatedly thwarted each attempt.

The weatheris still foul at the seaside spaceport and has delayed preparations to moveAtlantis? sister ship Endeavour from Launch Pad 39B to the nearby Pad 39A for aplanned June 13 blast off toward the InternationalSpace Station. NASA kept Endeavour on standby atop Pad 39B during therecent Hubble repair mission in case Atlantis suffered critical damage and itscrew required rescue. No such spacerescue was needed.

OnceAtlantis returns to Florida, shuttle engineers plan to study a short circuit inthat orbiter that occurred during its May 11 launch. The glitch afflicted oneof four redundant electronics boxes governing Atlantis? flight control surfaces.Engineers want to be sure a similar issue does not occur aboard Endeavourduring its upcoming flight, mission managers said.

If theweather falls in Atlantis favor, the ferry flight could return the shuttle toFlorida by Monday, Young said. The last shuttle to catch a piggyback ride homeatop a jumbo jet was the shuttle Endeavour, which returned home from theCalifornia landing site last December after its STS-126 mission to the spacestation.

?We?re justwaiting to see how it works out with the weather,? she added.