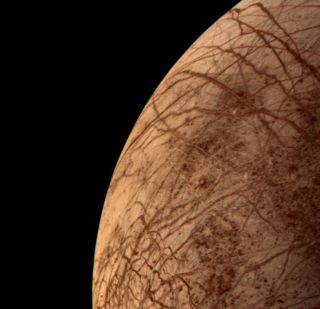 The icy shell on Jupiter's moon Europa may hide a rocky surface that's too strong to be geologically active.
(Image: © NASA/JPL)

For more than two decades, scientists have wondered whether extraterrestrial life may be flourishing deep below the icy coatings boasted by moons in our outer solar system.

Spacecraft like the Galileo mission to Jupiter and the Cassini mission to Saturn have stumbled on evidence that some of their moons hide global oceans, warmed by the pull of the giant planet they orbit. And oceanic explorers much closer to home have discovered dynamic communities living in darkness around geologic features on the ocean floor. Combine the two and it's easy to be carried away with dreams of alien seafloors teeming with microbes. But new research is looking deeper, into the rock itself, and suggesting that these worlds may be dead inside — not just biologically, but geologically as well.

"We were wondering, what would it look like if you were in a submarine and you were able to fly over the surface of the ocean floor on [Jupiter's moon] Europa," lead author Paul Byrne, a planetary geologist at North Carolina State University told Space.com last month at the annual conference of the American Geophysical Union in Washington. [Photos: Europa, Mysterious Icy Moon of Jupiter]

These are the seafloors where astrobiologists have hoped to find heated, mineral-packed seawater spitting out into the ocean, like hydrothermal vents and black smokers on Earth. In our oceans, those features support bustling communities centered on microbes ("crawlies," as Byrne calls them) that can feed themselves on chemicals produced where hot rock and seawater continuously mix. If similar structures are found on alien ocean worlds, the prospect of finding life on worlds far from the sun becomes just a little more plausible.

To reach that conclusion, the team focused on the rock itself, determining how much force would be necessary to break the rock in two ways we see on Earth: normal faults, which occur when rock is pulled apart, and thrust faults, which occur when rock is pushed together and which require more force to produce. The more force required to break rock, the less geological activity is happening — and that means less of the interactions between fresh rock and alien seawater that could theoretically support life.

Byrne and his colleagues focused on four ocean worlds: Jupiter's moons Europa and Ganymede and Saturn's Enceladus and Titan. For each of these worlds, the team calculated the strength of the rock. While there are plenty of questions we can't yet answer about these worlds, it turns out that rock strength calculations — which are commonly made on Earth for mining operations — are pretty feasible.

Those calculations are based on the thickness of the cold, solid rock layer, which rests on top of a warmer, mushy layer that can't break. An analogy may help. "Think of like a Milky Way bar or a Mars bar, it's where the chocolate and caramel touch," Byrne said. "That depth, you can treat that as the thickness of the brittle, rigid layer." The thicker it is, the harder it is to break.

Then the team added other values, like the body's gravity at a set depth and the weight of water and ice on top of the moon's rocky surface. Even when they included a range of plausible values for unknown inputs, the final calculations were in the same general range for each moon. [Photos: Enceladus, Saturn's Cold, Bright Moon]

Byrne said those initial results, which he was presenting at the conference, suggest that the rock is so strong that there's no force we know of on these moons powerful enough to regularly crack it. That's because of the sheer weight of the water and ice sitting above the rock. "When it actually comes to understanding how strong the rock is, it's pretty strong, and it's pretty strong because even though the gravity's pretty low there's a lot of water on top of it," Byrne said.

Each moon the team studied showed a different calculated rock strength, but the results aren't particularly promising for geological showstoppers or would-be alien life. "For Europa, it seems really, really hard to make any fractures or faults, and then once you look at Titan and Ganymede, these numbers are stupid high, really, nothing's happening at all on those worlds," Byrne said.

Enceladus' rock strength numbers aren't as grim, since this moon is much smaller than the other three, which reduces the weight of the water and ice above its rocky surface. The picture also looks a little different at Enceladus because its rocky core is more porous. If those pores happen to line up, they could carry water deep into the moon. "It's within the realms of plausibility that Enceladus might actually be wet and soggy all the way through," Byrne said.

And unlike for the other moons, scientists do have evidence suggesting that rock and water are interacting at Enceladus, thanks to Cassini's flight through seawater plumes shooting through the icy crust and into space, which identified organic compounds. "That's quite encouraging," Byrne said. "It's hard to explain that it's not rock and water touching."

If the rock at all these seafloors is too strong to be broken regularly, Byrne said, it's difficult to imagine much could be happening down there. On Earth, two major factors shaping the seafloor are soil washing off the continents and the bodies of sea creatures sinking to decay, and neither seems likely on these ocean worlds. Spacecraft haven't seen scars left behind by any impacts that seem large enough to plausibly make a recent dent on the seafloor. And based on his calculations, the rock is too strong to allow the moons to shrink like the planet Mercury or to sport volcanic chains or rift zones.

All that means the submarine ride suddenly looks awfully boring. "Basically, it becomes a list of things there won't be," Byrne said. "It'll look like a billiard ball, it'll be a weird smooth planet. It'll be a new type of rocky world in our solar system." [Photos of Ganymede, Jupiter's Largest Moon]

He emphasized that these aren't final results. The team is still seeing how other scientists respond to the calculations, and the research isn't published yet. And it will likely be decades before scientists could gather the data they might need to really test the idea — which would require seismometers on these alien seafloors. Humans are just now beginning to get their first good seismometer data from another planet, thanks to the InSight lander on Mars.

Byrne is philosophical about his team's calculations and how dramatically they seem to undermine what scientists have expected of these worlds. "If we're wrong, fine, that's how science works, that's grand, we'll take it, we'll be happy about it," he said.

In fact, he said he's a little sad about his own team's findings. "It would be great if we found interesting stuff, because these worlds are cool and maybe there's life there," Byrne said. "But if we're right, it means we do need to reconsider these worlds as habitable destinations or destinations for exploring habitability."