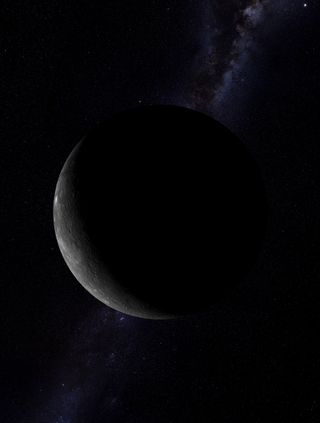 The surface of Mercury is shrinking faster than previously thought, photos from a NASA spacecraft orbiting the tiny planet reveal.

The first comprehensive survey of the surface of Mercury by NASA's MESSENGER spacecraft shows that planet's crust has contracted as it cooled by as much as 4.4 miles (7 kilometers), significantly more than previous estimates. The findings clear up a long-standing clash between scientists' understanding of the heat production and loss and the contraction of Mercury.

"These new results resolved a decades-long paradox between thermal history models and estimates of Mercury's contractions," said study lead author Paul Byrne of the Carnegie Institution for Science in a statement. [Latest Photos of Mercury from NASA's MESSENGER Probe]

The surface of Mercury is made up of just one continental plate covering the entire planet. Its enormous iron core, estimated to be about 2,500 miles (4,040 km) across, leaves only 260 miles (420 km) for a mantle and crust — an extremely thin skin for the solar system's smallest planet. The Earth's mantle, for comparison, is about 1,800 miles (2,900 km) thick, while the crust above it averages 25 miles (40 km) in thickness.

And as if that weren't enough for little Mercury, the tiny planet is shrinking.

Over the billions of years since its formation at the birth of the solar system, the planet has slowly cooled, a process all planets suffer if they lack an internal source of heat renewal. As the liquid iron core solidifies, it cools, and the overall volume of Mercury shrinks.

When NASA's Mariner 10 mission circled the planet in the 1970s, it captured images of surface features created by the shrinkage. The contracting planet pushed the crust up and over itself, forming scarps that can extend miles below the planet's surface. At the same time, the shrinking surface caused the crust to wrinkle up on itself, forming so-called "wrinkle ridges."

Byrne and his team used NASA's MESSENGER spacecraft to identify 5,934 ridges and scarps created by the contracting planet, ranging from 5 to 560 miles (9 to 900 km) in length. This created a substantially larger sample than those collected Mariner 10, which only imaged 45 percent of the surface. MESSENGER was able to map the entire surface.

NASA's MESSENGER probe (the name is short for MErcury Surface, Space ENvironment, GEochemistry, and Ranging) launched in 2004 and is currently in the middle of an extended mission around Mercury.

From Mariner 10 to MESSENGER

The scarps and wrinkle ridges identified by Mariner 10 allowed scientists to estimate that the planet had lost approximately 1 to 2 km, in global radius, a finding that contrasted with their understanding of the heat loss the planet suffered over time. Byrne's findings of a contraction of up to 4.4 miles (7 km) fits far more cleanly with present models.

"The discrepancy between theory and observation, a major puzzle for four decades, has finally been resolved," MESSENGER principle investigator Sean Solomon said in the same statement.

"It is wonderfully affirming to see that our theoretical understanding is at last matched by geological evidence."