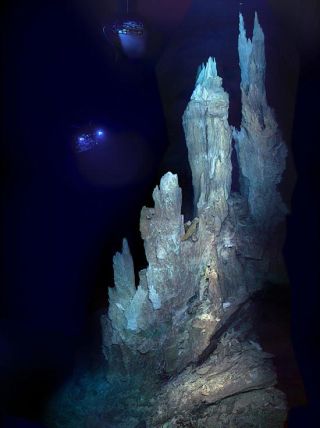 This is Part 3 of a six-part series telling the story of humankind’s efforts to understand the origins of life by looking for it in extreme environments where life thrives without relying on the sun as an energy source.

It follows an oceanographic expedition to the Mid-Cayman Rise led by Chris German of the Woods Hole Oceanographic Institution, and NASA’s efforts to plan a future mission to Jupiter’s moon Europa. By understanding how life can live without the sun, we may discover how life began on our planet and whether or not Earth is the only place in the universe capable of supporting a biosphere.

Hydrogen sulfide is a poison gas that’s lethal for humans even in very low concentrations. Yet, this compound — two parts hydrogen, one part sulfur — turned out to be the food source for bacteria that drive an entirely new ecosystem. (New to usat least. Some scientists suspect this type of ecosystem might, in fact, be the oldest on our planet.)

For more than a century, biologists have known that bacterial life can exist based on chemosynthesis, but before the 1977 Galapagos Hydrothermal Expedition, no one had imagined an entire ecosystem could be generated from chemosynthetic processes alone. [Extremophiles: World's Weirdest Life]

Chemosynthesis is the biological conversion of carbon molecules and nutrients into organic matter — the stuff of life. Whereas photosynthesis uses energy from sunlight to convert carbon dioxide into that organic matter, giving off oxygen as a byproduct, chemosynthesis uses inorganic molecules (such as hydrogen sulfide) or methane and combines them with an oxygen source (in this case seawater) to create simple sugars.

Those sugars are the fuel that bacteria live off, and the bacteria are the fuel that larger organisms need to survive. Chemosynthesis that uses hydrogen sulfide produces sulfur as a byproduct — and it’s the sulfur that smells like rotten eggs.

Hydrogen sulfide is one of many compounds that hitch a ride in the superheated water, rocketing back up to the surface of the seafloor after sneaking down through fissures to meet pockets of magma from the Earth’s mantle.

These substances get dissolved by the hot water from the rocks lining the fissure, creating a chemically enriched water mixture. This mixture then gets buoyant as it is heated, eventually escaping back into the frigid ocean water.

But how could such an alien process — fundamentally different from the basis for the vast majority of all life on Earth — exist here?

Enter Günter Wächtershäuser. A German chemist turned patent lawyer who specializes in chemical and biochemical inventions, Wächtershäuser (pronounced VEK-terz-hoi-zer) first proposed in 1988 that a similar chemosynthetic process to the one observed on the Galapagos Hydrothermal Vent Expedition had been around on Earth for a very long time.

Not only was it common to the planet Earth throughout its history, he argues, this process was fundamental to all living ecosystems going back to the very first genesis of life around four billion years ago. [7 Theories on the Origin of Life]

If we could travel back to that time, we’d see a wholly different Earth than the one we see today. We’d see a planet emerging from the cataclysm of an impact with a rogue planet that created the moon and is thought to have tilted the Earth’s axis to about 23.5 degrees.

Earth would have only recently cooled down enough to bear a solid crust, and intense volcanism and geological upheaval would have created a toxic atmosphere almost completely devoid of oxygen. With no ozone layer, the planet would be drenched with massive doses of ultraviolet light and radiation from the sun.

We’d see comets, meteorites and asteroids raining down across the landscape in a period of heavy bombardment, leaving behind condensed water that would form clouds and eventually, combined with volcanic outgassing, oceans. Photosynthesis wouldn’t take place on Earth for perhaps another two billion years.

Yet, it would have been in this literal hell on Earth that we would have seen (if we’d remembered to take a microscope with us) the first life forms start to appear.

Wächtershäuser, who’s also an honorary professor of evolutionary biochemistry at the University of Regensburg in Germany, points to Earth’s early oceans and period of high volcanic activity as the perfect environment for the birth of Earth Life Form No. 1, or the “pioneer organism”, an acellular (containing no cells) entity that likely passed through the loneliest life in the history of the planet in a manner of minutes.

His origin-of-life premise is called the Iron-Sulfur World Theory. It posits that hot, pressurized water mixed with dissolved gases (including hydrogen sulfide, carbon monoxide, carbon dioxide, hydrogen cyanide and ammonia) passed out of prehistoric vents and over various minerals containing iron, nickel and other metals within the rocks around the vents.[Gallery: Creatures of Deep-Sea Vents]

These metals served as catalysts for a chain reaction that synthesized organic compounds and coupled some of them with other metals to form new compounds with greater ability to yield new chemical reactions.

This coupling between the catalyst and the product of an organic reaction is the key first step of Wächtershäuser’s theory.

What comes next is the miracle of evolution. Starting with these metals and gases reacting together as life emerged, Wächtershäuser says evolution starts with the beginning of a primitive metabolism that created increasingly complex chemical reactions, eventually leading over time to the formation of DNA — life’s blueprints for making more living cells today.

Before living cells were around, these metals and gases reacted together in a purely chemical sense, according to predetermined “pathways.” There were only so many compounds around back then and only so many ways these could react together.

Aside from a few other trace molecules, these were the gases belched from the belly of the planet that formed the first chemical reactions that served as the precursor to life.

When these gases come up from deep within the Earth, they move from a state of high pressure and high temperature to one of low pressure and low temperature. This happens rapidly, causing a non-equilibrium condition called quenching— where the ratio of gases at a high temperature gets frozen in the same concentration upon transferring into a low-temperature environment.

The quenching is important because it creates a chemical potential. The chemical potential drives the reactions between gases and metals at hydrothermal vents. There, because of the unique combination of the right gases and the right metals at the right temperatures, reactions start to build off each other, creating “a synthetic reaction whereby the organic products that are synthesized promote in turn the rate of another reaction,” Wächtershäuser said.

In other words, certain reactions create byproducts that then are used to speed up other reactions, leading to longer, more complex strings of organic molecules.

According to his theory, all evolution happens using this method of “feed forward” reactions, where organic products promote other reactions yielding new organic products of increasing complexity. This is what gave rise to amino acids, peptides, sugars, proteins, nucleotides and nucleic acids, like DNA and RNA.

After that, as the theory goes, life evolved higher levels of complexity and ventured beyond vent communities. It isn’t clear when photosynthesis first arose, but most estimates range from 2.5 to 3 billion years ago. The rest, as they say, is history.

Since we can’t go back in time, we’ll never know if Günter’s theory of life rising from the depths of the Earth’s molten innards is true or not. And his is only one of several competing origin-of-life theories, which generally fall into two camps.

Metabolism-first theories (like the Iron-Sulfur World Theory) start with simple molecules that build increasing levels of complexity. Replicator-first theories, on the other hand, suggest that simple organic molecules occur naturally and are able to self-replicate right from the start.

Chemist Stanley Miller is in the replicator-first camp. Miller, who is sometimes referred to as the “Father of origin-of-life chemistry,” earned early fame for a classic experiment he conducted in 1952 as a graduate student with Harold Urey demonstrating how amino acids could be generated in a lab environment from simple compounds subjected to electrical discharges in the early Earth's atmosphere. [What Are the Ingredients of Life?]

The spontaneous creation of amino acids doesn’t by itself explain life’s origins, since it’s still a huge jump to go from simple amino acids to complex, self-replicating chains of genetic instructions contained within DNA and RNA. But his findings did lay the cornerstone for origin-of-life research and sparked many curious minds to test all sorts of combinations of conditions that could have been around on the early Earth. Still, 60 years later, none of these efforts have been able to replicate life from scratch in a lab.

One of the leading variants of the replicator-first camp is the “RNA World Theory,” which suggests that RNA molecules arose before the first proteins since before them, there would have been no molecule of heredity, or “blueprint” molecule to manufacture other molecules consistently.

Advocates of this theory say there was a time when RNA alone handled all maintenance activities of a cell, acting as both genetic material and a catalyst for metabolism reactions. The evolution of DNA then reallocated labor for replication and genetic storage to the more stable DNA molecule.

But Wächtershäuser thinks it’s too much of a jump to assume life began with the ability to self-replicate. “The beginning of the genetic machinery is not replication. Replication has no purpose in itself,” Wächtershäuser said.

To him, the beginning of the genetic machinery of replication begins with something akin to the chemistry that goes on in the core of the ribosome, which is a bit like the manufacturing plant of all cells. That chemistry boils down to peptide formation — basically, simple amino acids linked together.

It’s a crucial step and it’s something his experiments have been able to produce in the lab under high temperature conditions — the same conditions that are thought to have been around in the early Earth around hydrothermal vent systems. It isn’t conclusive proof his theory is right, but he’s getting closer.

Unfortunately for Wächtershäuser, maybe the best proof to his theory lies about 500 million miles away (800 million kilometers) from his lab in Germany, beneath the icy shell of a moon discovered more than 400 years ago by a man named Galileo Galilei: Jupiter’s moon Europa.

This story was provided by Astrobiology Magazine, a web-based publication sponsored by the NASA astrobiology program. Follow SPACE.com on Twitter @Spacedotcom. We're also on Facebook & Google+.