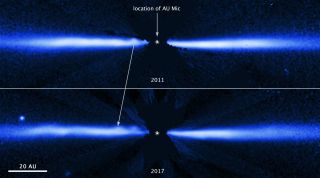 The sort of small, young, active stars that have become most exciting to astronomers looking for exoplanets may actually push away precisely what could be necessary to carry water to those planets — leaving them too dry to support life.

That's the suggestion of one recent study of just such a star, in the class astronomers call M dwarfs. The lead researcher presented an update about the project at a conference, where she stressed that the research was ongoing — but that it posed intriguing challenges to astronomers' ideas about where to look for life.

"The show's going to be basically over certainly by 30 million years," Carol Grady, a scientist at Eureka Scientific, a company that hires and facilitates scientists applying for funding and instrument use as principal investigators, said during a news conference held Tuesday (Jan. 8) at the annual conference of the American Astronomical Society. "What this suggests is that processes which depend on disk survival may be inhibited in systems around young M stars, and this includes the delivery of water and organics to terrestrial-mass planets in the habitable zone." [7 Ways to Discover Alien Planets]

Grady and her colleagues came to this conclusion by studying Hubble Space Telescope images of the debris disk surrounding a star called AU Microscopii taken between 2010 and 2018. The star is fairly close to us, at less than 32 light-years away, and scientists know that it's about 24 million years old. As far as scientists know so far, it sports one planet, which orbits once every month or so.

The images the team studied rely on a coronagraph, which blocks out the light of the star itself so that the disk surrounding it isn't outshone. "We basically put a fist over the star," Grady said. "It's exactly like walking down the beach at sunset when you're trying to see — Is that your friend who's got the ice creams you wanted? — so you just stick your hand out and block the light and improve your contrast."

As they were studying these images, the team noticed that they could see the same blob-like feature in the disk surrounding

, but that it seemed to migrate outward over time. Then they saw another, and another. They've identified a total of six such structures, which in our solar system would stretch from the sun out to Jupiter.

Those blobs are concerning because they seem to be pushing material out of the debris disk around the planet. It's that debris field that a planet born dry would need to rely on to carry water and other life-fostering chemicals to it during bombardments. (This is how Earth got the water in your body, for example.)

And according to the progress of the blobs Grady and her colleagues tracked, around AU Microscopii, that could wipe out the debris disk in about 1.5 million more years. That means the system would have had such cosmic deliveries for less than 30 million years all told — probably not long enough to build up a particularly wet planet and give life time to evolve.

The new research is far from the first challenge to the idea that planets orbiting close to small stars might be promising places to look for life. While these planets are easy to identify using the most productive technique, the transit method, and they seem to be the right temperature to hold liquid water, astronomers have pointed to plenty of other factors that could influence habitability, like the harsh flares of radiation these stars produce. The loss of debris disks could be just one more factor that depreciates these stellar neighborhoods.

But what's truly stumping the team working on the new research is precisely what those blobs actually are. "We do not know the mechanism responsible for ejecting these things," Grady said. "[We've considered] a large number of mechanisms that have died various messy deaths." For example, they thought the phenomenon might be caused by a distant planet, but that didn't seem to match the geometry of the situation.

Grady said she and her colleagues are hoping to win more telescope time to chip away at the continuing mystery, but that it's a logistically challenging phenomenon to tackle. "Astronomers tend to like projects with beginnings and ends, and the problem is, what we're finding is phenomena which take longer."