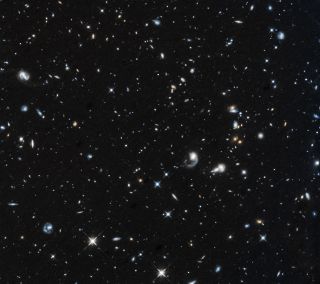 The Hubble Space Telescope photographed a field of star-forming galaxies located approximately 11 billion light-years away from Earth, in the constellation Pegasus. This was the first photo taken after the telescope returned to activity on Oct. 27, 2018.
(Image: © A. Shapley(UCLA)/NASA/ESA)

After taking a short break from observing the cosmos, NASA's Hubble Space Telescope is officially back up and running, and the observatory captured a stunning new view of a distant, star-forming galaxy.

On Oct. 5, the Hubble telescope went into a protective "safe mode" when one of its orientation-maintaining gyroscopes failed. After about three weeks, the mission team was able to fix the balky gyro and get Hubble back online. Shortly thereafter, the telescope homed in on a field of star-forming galaxies located approximately 11 billion light-years away from Earth, in the constellation Pegasus.

The new image, taken on Oct. 27 using the telescope's Wide Field Camera 3, was the first picture captured by the telescope after it returned to service, according to a statement from NASA. However, getting Hubble back online was no easy feat; it involved an entire team of engineers and experts who worked tirelessly to find a fix, officials said in the statement. [The Hubble Space Telescope's Greatest Discoveries]

"This has been an incredible saga, built upon the heroic efforts of the Hubble team," Jennifer Wiseman, Hubble senior project scientist at NASA's Goddard Space Flight Center in Greenbelt, Maryland, said in the statement. "Thanks to this work, the Hubble Space Telescope is back to full science capability that will benefit the astronomical community and the public for years to come."

Once members of Hubble's operations team were notified that the telescope had stopped taking science observations, they quickly tried to revive the failed gyro, but were unsuccessful.

Instead, the team was able to activate a backup gyro on the spacecraft. However, that gyro soon reported incredibly high rotation rates of 450 degrees per hour, when Hubble was actually turning at less than 1 degree per hour. The team had never seen rates that high on any other gyros, according to the statement.

The Hubble telescope has a total of six gyros, but generally uses only three at a time to collect data about the telescope's orientation. Because two of the telescope's six gyros had previously failed, this was the final backup gyro. That meant the operations team had to figure out how to get it working or resort to a possible "one-gyro mode," which would greatly limit Hubble's observations.

"The team pulled together to staff around the clock, something we haven't done in years," Dave Haskins, Hubble's mission operations manager at Goddard, said in the statement. "To me, it was seamless. It shows the versatility of the team."

NASA also brought in an additional team of experts to figure out how to correct the backup gyro's unusual behavior. After weeks of creative thinking, continuous tests and minor setbacks, the team concluded that there may be some sort of blockage. They attempted to resolve this issue by switching the gyro between different operational modes and rotating the spacecraft. As a result, the gyro gradually changed its rotation to more-normal rates, according to the statement.

Following that success, the team uploaded new software to the telescope and performed a series of practice maneuvers to simulate real science observations. This ensured that the telescope was ready for action, with three working gyros.

Meanwhile, other team members had turned their focus to preparing Hubble to use only one gyro. Even though those preparations are not needed right now, NASA officials said the telescope will inevitably be switched to one-gyro mode at some point, and now teams will be ready for that.

"Many team members made personal sacrifices to work long shifts and off-shifts to ensure the health and safety of the observatory, while identifying a path forward that was both safe and effective," Pat Crouse, Hubble project manager, said in the statement.

"The recovery of the gyro is not only vital for the life expectancy of the observatory, but Hubble is most productive in three-gyro mode, and extending this historic period of productivity is a main objective for the mission," he said. "Hubble will continue to make amazing discoveries when it is time to operate in one-gyro mode, but due to the tremendous effort and determination of the mission team, now is not the time."