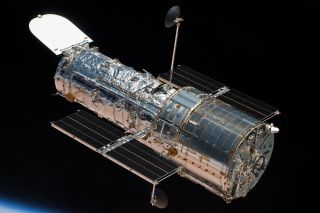 It looks like NASA's famous Hubble Space Telescope has recovered from the glitch that knocked the observatory offline more than two weeks ago.

On Oct. 5, Hubble went into a protective "safe mode" after one of its orientation-maintaining gyroscopes failed. Mission team members tried to recruit a backup gyro, but that instrument refused to behave, returning anomalous readings.

However, a number of troubleshooting activities conducted over the past week appear to have brought the balky gyro to heel, NASA officials announced today (Oct. 22). The mission team just needs to run a few more tests to make sure everything's fixed. [The Hubble Space Telescope: A 25th Anniversary Photo Celebration]

"The Hubble operations team plans to execute a series of tests to evaluate the performance of the gyro under conditions similar to those encountered during routine science observations, including moving to targets, locking on to a target and performing precision pointing," NASA officials wrote in a Hubble update. "After these engineering tests have been completed, Hubble is expected to soon return to normal science operations."

Hubble has a total of six gyroscopes, all of which were replaced by spacewalking astronauts during a servicing mission in May 2009. Each gyro consists of a wheel, which spins at a constant rate of 19,200 revolutions per minute, encased inside a sealed cylinder. This cylinder floats in thick fluid (and is in fact called a float).

"These gyros have two modes — high and low," NASA officials explained in the same statement. "High mode is a coarse mode used to measure large rotation rates when the spacecraft turns across the sky from one target to the next. Low mode is a precision mode used to measure finer rotations when the spacecraft locks onto a target and needs to stay very still."

To operate at maximum efficiency, the telescope needs three functioning gyros, but it can get by with just one if necessary, NASA officials have said.

With the Oct. 5 failure, three of Hubble's gyros are now out of commission. The backup gyro that mission team members are trying to bring online had been turned off for more than 7.5 years. So, the rust it showed upon startup on Oct. 6 — namely, reporting abnormally high rotation rates — perhaps isn't surprising.

Hubble's handlers restarted the backup gyro on Oct. 16, but that didn't do any appreciable good. Then, two days later, they commanded the telescope to turn in opposite directions multiple times in an attempt to clear any blockages that might be causing the gyro's odd readings.

And that appears to have done the trick.

"Following the Oct. 18 maneuvers, the team noticed a significant reduction in the high rates, allowing rates to be measured in low mode for brief periods of time," NASA officials wrote. "On Oct. 19, the operations team commanded Hubble to perform additional maneuvers and gyro mode switches, which appear to have cleared the issue. Gyro rates now look normal in both high and low mode."

Hubble, a joint mission between NASA and the European Space Agency, launched to Earth orbit aboard the space shuttle Discovery in April 1990. Spacewalking astronauts have maintained and upgraded the telescope multiple times, performing five servicing missions between December 1993 and May 2009.