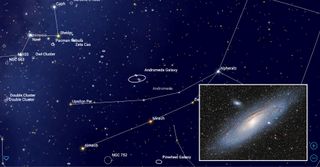 The Andromeda Galaxy, also known as Messier 31 (or M31), is one of the most distant objects visible to unaided human eyes. This spiral galaxy, located 2.5 million light-years away from our sun, is considered to be a "twin sister" to our own galaxy in appearance. Look for it as a faint and elongated fuzzy patch sitting a palm's width above the bright star Mirach, or use the top three stars of Cassiopeia as a pointer. The inset image, taken by Ron Brecher of Guelph, Ontario, reveals the pink star-forming regions and dark dust lanes contained in the enveloping spiral arms. Two elliptical galaxies designated M110 and M32 are positioned just above and below the central core, respectively.
(Image: © SkySafari App/Ron Brecher, used with permission)

The most distant object in space that we can see with our unaided eyes, the Andromeda Galaxy, is located more than 2 million light-years away — but you can see it in the early evening night sky this autumn.

Step outside this week and look high overhead at around 8:30 p.m. local time, and you'll be able to sight what is without a doubt the most famous galaxy in all of our sky, M31, in the constellation Andromeda — an object that nearly a century ago helped extend our perspective of the cosmos as nothing else has ever done.

As recently as the early 1900s, astronomers quarreled about whether this and other spiral "nebulas" were part of our own system of stars, which we call the Milky Way, or if they were "island universes" — that is, independent stellar systems of their own. [Seeing the Best Night-Sky Sights of Autumn Using Mobile Apps]

In an attempt to settle this issue once and for all, on April 26, 1920, two leading astronomers of the day, Harlow Shapley and Heber D. Curtis, squared off at the Smithsonian Museum of Natural History in Washington, D.C., in what has since become known as "The Great Debate." At the time, Shapley — who ultimately went on to become one of the 20th century's greatest extragalactic experts — incorrectly argued that these spiral "nebulas" were part of our own stellar system. He was led astray by Adriaan Van Maanen, an astronomer working at the Mount Wilson Observatory, who measured the distances of stellar objects using parallax. For example, when we measure the position of a star from two diametrically opposite locations along our orbit, the apparent difference in the star's position — however slight — can provide us with a fairly accurate value that reveals how far away the star is from us.

You can try this for yourself by holding one hand out at arm's length; look with one eye and use your thumb to cover a distant object. Now close that eye and open the other, and you'll see that your thumb no longer covers the object; its position has apparently shifted. When using parallax to determine stellar distances, your thumb would represent the star, while your eyes would represent the diametrically opposite points on Earth's orbit.

This method works quite well — if the star in question is relatively close to us. But not so for stars located at much greater distances. Evidently, Maanen sold Shapley on the idea that he could measure these diminutive annual shifts for practically anything, regardless of how far away they were!

Curtis, on the other hand, was firm in the opinion that these spirals were not clouds of gas embedded within our own galaxy, but, rather, galaxies themselves.

The piece of evidence that proved Curtis correct came in 1923 — ironically, courtesy of another Mount Wilson astronomer, Edwin Hubble. Hubble actually killed two birds with one stone by using the 100-inch Hooker Telescope, which was the largest in the world at the time.

First, Hubble resolved the outer portions of M31 into individual stars, thus proving that it was indeed a stellar system and not, as Shapley had assumed, a gaseous nebula.

Then, he discovered that some of those stars were Cepheid variables.

In 1912, Henrietta Leavitt, a researcher at Harvard College Observatory, made the awesome discovery that Cepheids fell into a special category of variable stars. Within this special group, the periods of the stars were directly related to their true (absolute) brightnesses. That discovery, known as the period-luminosity relationship, demonstrates the difference between a Cepheid's absolute and apparent brightness and accurately establishes its distance, whether it's in our own galaxy or in another far out in space. And by finding Cepheid variables within M31, Hubble now had hard evidence of the galaxy's great distance, and soon the concept of individual galaxies separated by enormous distances became widely accepted. ['The Glass Universe': How Women 'Computers' Measured the Stars]

Astonishing data and how to find it

M31 — which from here on I'll refer to as the Andromeda Galaxy — is the most distant object that can be seen with the naked eye. I'll provide some tips on how to find it in just a moment, but first, here are a few "gee-whiz" statistics:

To the eye, the Andromeda Galaxy appears as a dim and indistinct patch of light, like a faint star veiled behind a small cloud. When you see it, you will be doing something that no one else in the world except a stargazer can do: You will be looking into the distant past. In this case, it is (or was) in the very remote past as we count our chronology here on Earth, for tonight's light left Andromeda 2.5 million years ago, during the Paleolithic period (also known as the Stone Age), when hominids began developing tools made out of stone.

In that dim and indistinct patch, we have the combined light of an estimated one trillion stars. Compare that to our own Milky Way Galaxy, which contains "only" 200 billion to 400 billion stars. And from one end to the other, the Andromeda Galaxy measures some 220,000 light-years across, which makes it more than twice as large as our own.

You need good eyesight and a clear, dark night, far from any bright lights, to actually see it for yourself. If you have binoculars, they will prove to be a great help. First, locate the Great Square of Pegasus. Then, concentrate on the bright star Alpheratz, which is located in the upper-left corner of the Square. To the upper left of Alpheratz are two stars: First comes Mirach, which appears somewhat dimmer than Alpheratz; and then a similar distance to the upper left is a brighter star, Almach. Now, from this star, shift above and to the right about the same distance, and you'll see three faint stars forming a triangle. Except one of those stars looks like a fuzzy or blurred patch of light.

With binoculars and telescopes

The galaxy is impressive when viewed through small telescopes, although you'll probably be disappointed that you can't see the details that appear in photographs. What you are likely to see is the galaxy's bright central hub and its much fainter, outer extensions. Photographs reveal the galaxy's spiral arms, separated by dark lanes of obscuring dust. On an exceptionally clear night at the annual Stellafane conference near Springfield, Vermont, in 1975, I had the opportunity to view Andromeda through a 6-inch, "rich field" telescope and was able to fully see its distinct oval shape as well as two dark dust lanes.

But probably the most amazing observation was by French astronomer Robert Jonckheere in 1953, who used special 2-inch binoculars with all optical surfaces coated and with the oculars centered so he fully used both of his pupils Jonckheere also made sure to give his eyes a full 10 minutes of dark adaptation and excluded all light except from the galaxy itself. He claimed to have seen the galaxy stretching for more than 5 degrees in width — longer than the distance that separates the two Pointer stars (Dubhe and Merak) in the bowl of the Big Dipper!

Who was the first person to see the Andromeda Galaxy? Most astronomy texts give the same answer: the Persian astronomer al-Sufi, who left the first written record of it in the 10th century. But perhaps the first sighting actually came many centuries earlier. In the middle of the fourth century, a Roman nobleman, Rufus Festus Avienus, wrote an astronomical poem based on a famous Greek poem, "Phaenomena." Most old star atlases and allegorical pictures portray Andromeda's wrists in ropes or chains as she awaited her death by the sea monster Cetus. And yet, Avienus writes of Andromeda:

Some, like classical scholar Roger Ceragioli of Harvard University, believe that Avienus was making an indirect reference to the galaxy. "Avienus' description of the ropes as clouds makes a bizarre image, until you realize that he is alluding to M31. Then it makes perfect sense," Ceragioli wrote in a September 1989 article in Sky & Telescope.

So, as you look out at the soft glow of the Andromeda galaxy on these late November evenings, remember that this is where we took our first step in understanding how truly vast the universe is.